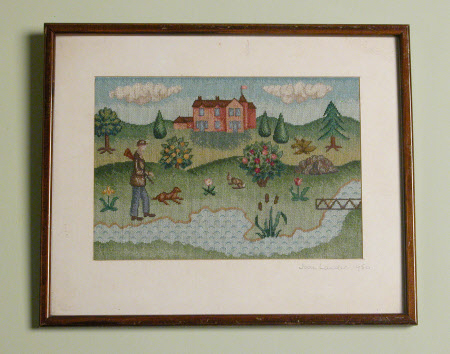 This embroidery brings together two of Joan Lander’s greatest loves; needlework, and her home at Sunnycroft. The design shows her father with his gun-dog at Sunnycroft, and is a piece of Petit Point work. Petit point is a form of canvas embroidery similar to cross-stitch embroidery but even finer because of its small scale.

Silk thread and cross stitch needleworked picture, framed in dark wood. Designed and worked by Joan Lander, picture is based on Sunnycroft, showing house, Wellingtonia avenue, brook and T.O Lander with gun and dog. Made by Joan Lander in 1950 during her studies at the Royal School of Needlework.