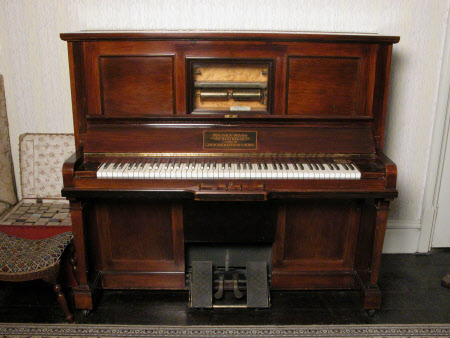 This particular self-playing pianola is also known as a ‘Player-Piano’; although it can be played as a regular piano, it has an internal player mechanism which holds a reel of perforated paper. The pianist must pump the pedals to make the mechanism ‘read’ the holes in the paper, and play the corresponding music. The final effect is as though a ghost is playing the piano, as the keys move without seemingly being touched.

Upright pianola 'player-piano'. The slightly wider than usual case is finished in dark rosewood. It incorporates a 65-note player mechanism, the spool box of which is concealed behind a sliding panel in the top door. The treadles to pump the player are hinged to swing down outside the piano pedals or be folded back up when not in use. In front of the keyboard are the bass, treble, tempo and re-roll levers.