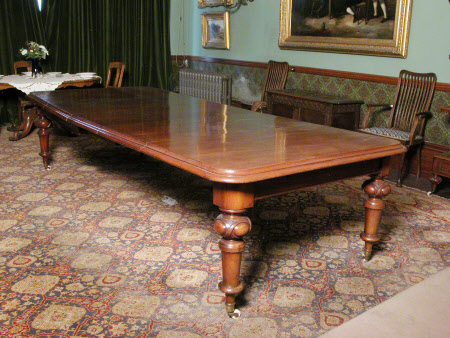 Sunnycroft was built in 1880 for J.G. Wackrill, founder of the Shropshire Brewery. It was bought in the early 1890s by Mary Jane Slaney who proceeded to extend the house and lay out the grounds to create the estate that is there today. After Mary Slaney died in 1912 the property was bought by her brother-in-law John Vernon Thomas Lander. Three generations of the Lander family lived at Sunnycroft. J.V.T. Lander's granddaughter Joan bequeathed the estate to the National Trust in 1997. This dining table was brought to the house by Joan Lander's father Offley Lander in 1943 when he purchased Sunnycroft.