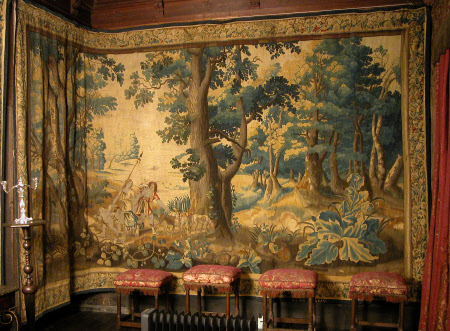 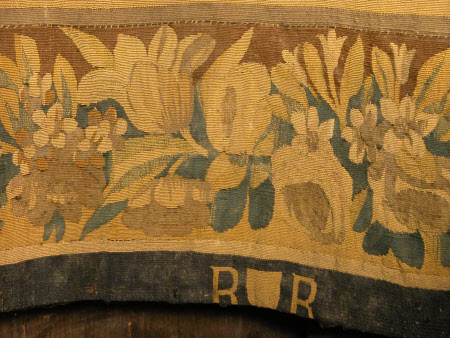 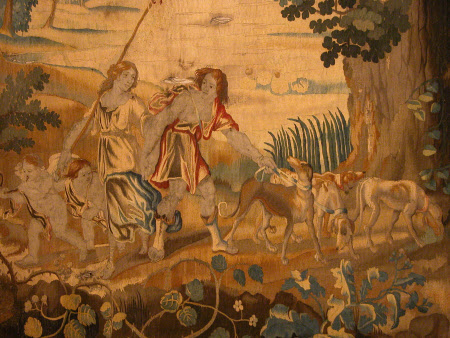 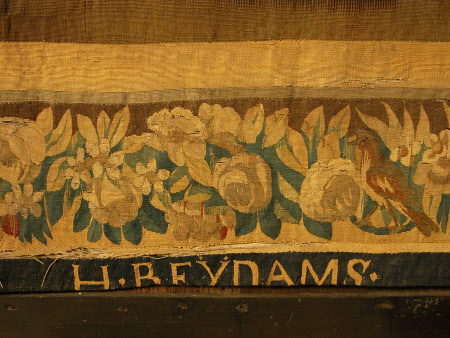 Tapestry, wool and silk, Huntsman and Shepherdess from a set of Stories from Ovid, Hendrik II Reydams, Brussels, c. 1670-1682. To the left of centre are a huntress holding a spear and accompanied by two putti, and a huntsman with three hunting dogs. The setting is a wooded landscape. The borders are of fruit, leaves and birds on a brown ground. All four sides of the tapestry are finished with a blue galloon that had been previously folded to neaten on all four sides. The tapestry is one of six with stories from Ovid’s ‘Metamorphoses’ made in Brussels by Hendrik II Reydams, whose signature appears on most of the set along with the mark of the city. The tapestries may be the ‘6 peces of Tapestry Storys out of Ovid out of ye ante Chamber to the Rich bed Chamber’, listed among a load of goods ‘Caried from [?Copt]hall to Knowle out of ye Qu[en]es C[?hamber]’ on 13 December 1700. This indicates that the tapestries may have among the goods taken as perquisites by the 6th Earl of Dorset from Queen Mary’s apartments at Whitehall after her death in 1695.