Count Ugolino and his Children in the Dungeon 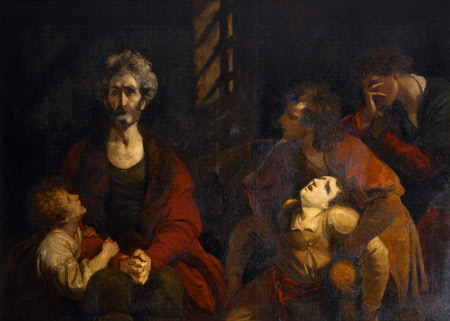 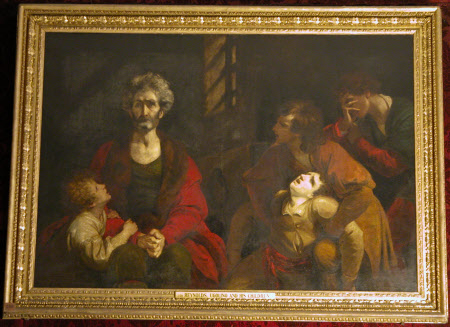 Ugolino was a real-life political figure of thirteenth-century Pisa, who, entangled in the political rivalry between the Guelph and Ghibelline parties, was imprisoned with his sons and grandchildren and left to die of starvation. The story was popularised by Dante’s fictionalised encounter with the politician, described in the epic Divine Comedy. Ugolino’s harrowing final words in the poem – ‘Then fasting got/The mastery of grief’ – imply that the prisoner’s hunger was so overpowering that he proceeded to eat the bodies of his own children. Reynolds depicts the point at which the prison door is closed and its captives are faced with the realisation of their grim but inevitable fate. Ugolino was a popular subject in British art and literature throughout the eighteenth century, of which Reynolds’s painting is probably the most important and influential example. It caused quite a stir when it was exhibited at the Royal Academy in 1773 and went on to influence a number of paintings on similar themes in Britain and abroad.

Oil painting on canvas, Count Ugolino and his Children in the Dungeon by Sir Joshua Reynolds PRA (Plympton 1723 - London 1792), 1773. Historical scene from Dante's 'Divine Comedy' showing Count Ugolino della Gherardesca, Count of Donoratico (c.1220-1289) and his sons and grandchildren imprisoned in a dungeon. Ugolino is shown on the left, surrounded by his children and grandchilden, in various states of despair. A barred window can be seen in the background.

Ugolino de’Gherardeschi was a disreputable political figure of thirteenth-century Pisa. Entangled in the political rivalry between the Guelph and Ghibelline parties, Ugolino was ultimately betrayed by his supposed ally, the Archbishop Ruggieri, and imprisoned – together with two of his sons and two grandchildren – in a tower and left to die of starvation. The story of Ugolino’s incarceration was popularised by Dante’s fictionalised encounter with the politician, described in the Divine Comedy. In the Inferno, Dante witnesses the terrible sight of two spirits buried in ice, one of whom is gnawing on the skull of the other. The poet enquires as to what sins justify the penalty of eternal cannibalism, to which Ugolino – who had been devouring the head of the Archbishop – replies with his miserable tale. Ugolino’s harrowing final words – ‘Then fasting got/The mastery of grief’ – imply that the prisoner’s hunger was so overpowering that he proceeded to eat the bodies of his own children, who had previously offered themselves as food in response to their father’s despair. The painting was captioned with the following lined from Dante’s poem when it was exhibited at the Royal Academy in 1773: I did not weep, I turned to stone inside ; they wept, and my little Anselmuccio spoke : ‘What is it, father? Why do you look that way?’ For them I held my tears back, saying nothing, all of that day, and then all of that night. This excerpt connects the painting to the point at which the prison door is closed and its captives are faced with the realisation of their grim but inevitable fate. John Frederick Sackville, the 3rd Duke of Dorset (1745-1799) was a close friend of Reynolds and the artist’s most influential patron of the 1770s. Of particular significance is the number of subject paintings he purchased, including Ugolino in 1775. Reynolds’s ledgers record a payment of four hundred guineas. It is alleged that, in response to a challenge over the high sum, the Duke retorted: ‘the picture affords me so much more pleasure than the money would, that I do not know how it could be better applied.’ In his biography of Reynolds, James Northcote (1746-1831), a pupil of the artist’s, suggests that Ugolino originated as a portrait study of George White, a well-known model of the time. According to Northcote, the painting was altered to become a historical picture ‘by accident’, almost immediately prior to its completion in 1773. Northcote writes that: "[…] the head of the Count had been painted previous to the year 1771 […] without any intention, on the part of Sir Joshua, or making it a subject of an historical composition, or having the story of Count Ugolino in his thoughts. Being exposed in the picture gallery […] it was seen, either by Mr. Edmund Burke, or Dr. Goldsmith, I am not certain which, who immediately exclaimed, that it struck him as being the precise person, countenance, and expression of the Count Ugolino, as described by Dante in his “Inferno”." However, Northcote’s account – specifically the assertion that the subject of Ugolino was an afterthought and not in the artist’s mind (nor his own idea) from the beginning – has been repeatedly called into question. Reynolds’s pocket-book contains references to a painting of ‘Hugolino’ as early as 1770. Ugolino was a popular subject in art and literature throughout the eighteenth century. Generally speaking, however, Dante’s reputation was at a low point in England at this time. The exhibition of Reynolds’s painting in 1773 has been acknowledged as a catalyst for the revival of Dante that occurred in the late eighteenth century. In fact, the picture assumed an important role in the development of late eighteenth-century art – not only in terms of the debate it generated about the genre of history painting, but also in the revival of Dante as a meaningful source for artists and the more general ‘Gothic’ theme of imprisonment. Following its exhibition at the Royal Academy in 1773, Horace Walpole, remarked that the picture was ‘most admirable’. Other reviews were equally praising, although some were more critical of Reynolds’s venture into history painting, and advised the artist to ‘keep to your portraits’. On balance, however, Reynolds was happy with its reception – in a letter from July 1773, the painter expressed his delight that the painting ‘got me more credit than any I ever did before’. Ugolino was exhibited a further seven times in the nineteenth century, and also became well-known on the continent, particularly in France and Italy. Its fame in this sense was due to the publication of a mezzotint after the painting, engraved by John Dixon in 1774. Several French neo-classical paintings from the end of the eighteenth century demonstrate an awareness of Reynolds’s composition, such as Pierre-Narcisse Guerin’s 'Return of Marcus Sextus' and Jacques-Louis David’s 'The Lictors Bring to Brutus the Bodies of his Sons'. (Hayley Flynn, April 2014. Adapted from NT Apollo article, due to be published June 2014).

Purchased from the artist by John Frederick Sackville, 3rd Duke of Dorset (1745-1799) for Knole in 1775, and thence by descent; accepted by HM Treasury in lieu of death duties on the estate of 4th Lord Sackville (1870-1962) and transferred to the National Trust in 1995.