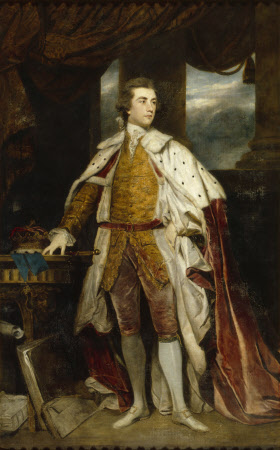 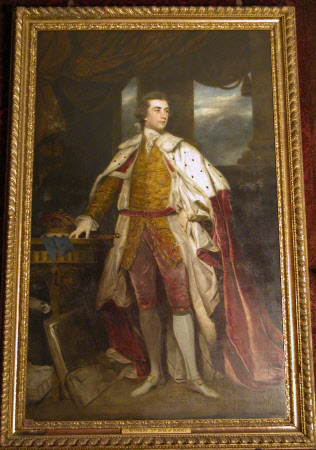 The 3rd Duke of Dorset was a serious collector and supporter of the contemporary arts. He was a close friend of Reynolds and acquired many of his paintings, of which this portrait was the first. It shows the 3rd Duke in the robes he wore to the Coronation of George III. The blue ribbon of the Garter at his knee was added later, since he was not awarded this honour until 1788.

Oil painting on canvas, John Frederick Sackville, 3rd Duke of Dorset, KG (1745-1799) by Sir Joshua Reynolds PRA (Plympton 1723 - London 1792), 1769. A full-length portrait in the robes he wore to the Coronation of George III. He is turned slightly to the left, gaze and head turned to the right, wearing a gold coat and breeches, white stockings and white shoes under a crimson and ermine mantle. His left hand is on his hip and the fingers of his right hand touch the top of a table on the left, on which sits his coronet and sword and the blue ribbon of the Garter and lesser George (which were added later). There are folders of papers beneath the table, a pillar behind with drapes pulled back to reveal a cloudy sky.

Knole, The Sackville Collection (acquired with the help of the National Heritage Memorial Fund and transferred to the National Trust in 1988)