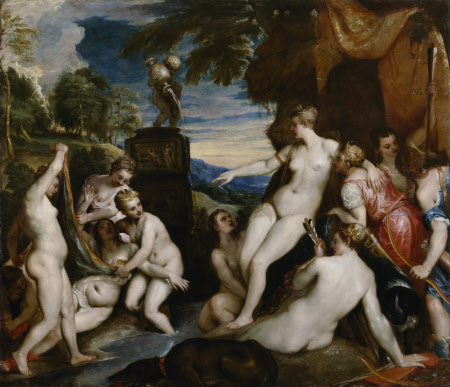 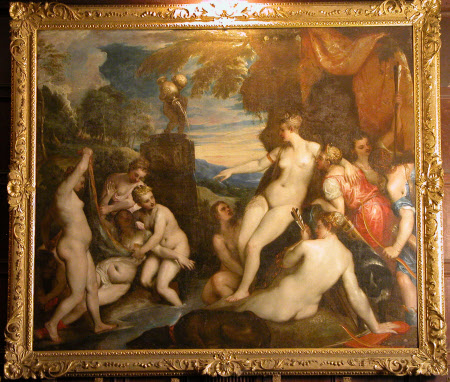 Oil painting on canvas, Diana and Callisto, after Titian (Pieve di Cadore 1488/90 - Venice 1576). A superior copy probably by a Spanish artist only surpassed by Rubens's version now in the Earl of Derby collection. A pair to P/163. A copy after the original from the Duke of Sutherland collection and now owned by the National Gallery, London and the National Galleries of Scotland which was painted for King Philip II of Spain between 1556 and 1559 and belongs to a group of large-scale mythologies inspired by the Roman poet Ovid’s Metamorphoses.Titian himself referred to them as ‘poesie’ - the visual equivalent of poetry. Callisto was an Arcadian nymph who was one of Diana’s companions in the chase and vowed to chastity. Zeus fell in love with her and raped her though she struggled against him she became pregnant. One very hot day, months later, Diana persuaded all her companions to undress and bathe in a cool stream, Callisto refused, and her companions stripped her clothes from her. Diana realising the truth, banished her. She gave birth to a son Arcas and Hera in a fury turned her into a bear and Diana set her dogs on her, Jupiter saved her and transported her to the heavens. Calisto was an attendant of Diana and she expected that her cult of chastity would be respected. However, Zeus, disguising himself as Diana, seduced Callisto – the scene shows Callisto’s obvious pregnancy being revealed to Diana – in disgust Diana transforms Callisto into a bear and sets the dogs on her – Callisto is rescued in the nick of time by Zeus who places her in the heavens to shine forever as the ‘Great Bear’.