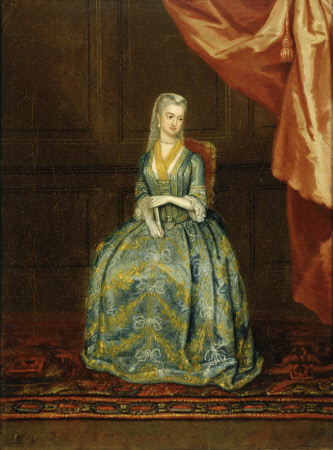 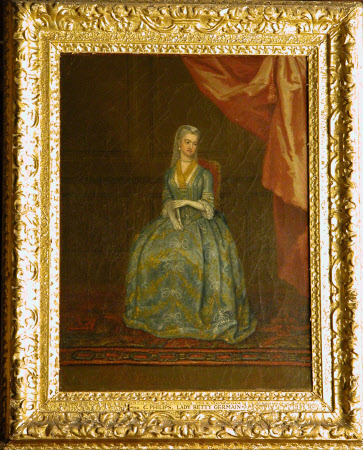 Oil painting on canvas, Lady Elizabeth 'Betty' Berkeley, Lady Germain (1680-1769) by Charles Philips (London 1708 - London 1748), signed and dated: C. Philips Pinxt 1731. A full-length portrait of a woman, seated, on a red upholstered chair on a Turkey carpet, she is turned slightly to the left, head turned to the right and looking down, wearing a long blue dress embroidered with yellow flowers which are tied with silver cord bows, a fan held on her lap with both hands, a red silk drape is looped up in the right corner.

She was the daughter of the 2nd Earl of Berkeley and second wife (m.1706) of Sir John Germain (1650-1718), who left her Drayton and all the property that he had inherited from his first wife, Lady Mary Mordaunt, divorced wife (because of adultery with him) of the 7th Duke of Norfolk. This was in gratitude for her devoted care of their three children who all died young. She being much younger than him, he expressed the hope that she would marry again and have children, but failing that, that in memory of his old comrade-in-arms, General Colyear, whose daughter Elizabeth was married to, the 1st Duke of Dorset, that she should designate the second son of the Duke as her heir. This ultimately fell to Lord George Sackville (cf. No.251). Lady Betty lived at Knole for a time and the two small rooms which she occupied are today called after her. She barely lived at her chief seat, Drayton, but Horace Walpole, on his visit there in July 1763 (Journals of Visits to Country Seats, &c., Walpole Society, vol.XVI, 1927-8, no.xxix, pp.51-58, esp.p.55) was nonetheless high in his praise of her maintenance of it: "She has for 45 Years exercised the noblest & most extensive charities. From the Drayton-estate she has scarce ever carried a Shilling to London, except to make purchases or repairs for the Place, spending the whole income in the neighbourhood, tho She has seldom lived there above six weeks in the year. The old furniture and customs She has kept up most religiously, & maintained the house in the most perfect order & preservation. There is scarce a House in England so entire in the old fashioned manner."