A Landscape with Mercury and Argus 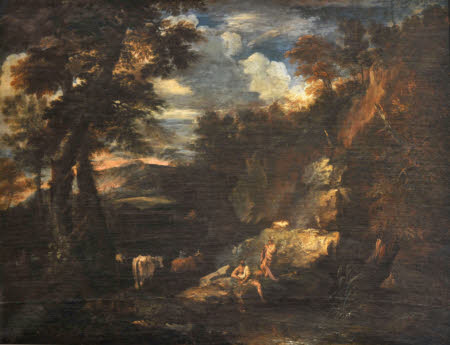 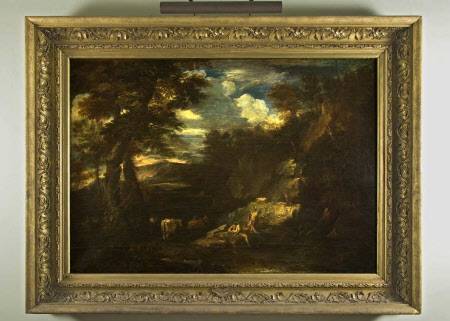 Oil painting on canvas, A Landscape with Mercury and Argus, follower of Salvator Rosa (1615-1673). Depicts an extensive, wooded classical landscape with a river and a castle, figures in the foreground. Mercury is piping to the resting Argus, in the foreground of a rocky and wooded landscape, with Io in the shape of a white heifer cow nearby, to the left of them.

Unknown [in view of the size of the present picture, and the importance that it would have had if it were to have been imported into England as early as the 18th century, when it is also conceivable that it might have been ascribed to ‘Gaspard Poussin’, it is just worth raising the possibility of its having been one of the ‘Four .... Capital Pictures, Late the Property of the ingenious Mr. [James] Russel, Antiquarian [and Painter], deceased [d.1763]’, that were included in Robert Ansell’s sale at Christie’s, 11 Feb. 1769, lot 42, as: ‘Mercury and Argus G. POUSSIN’ (boughtt. [?Gilbert Fane] Flemming/Fleming for £5.12.6). It is all the more worth putting this suggestion forward in that Marie Nicole Boisclair, in her exhaustive monograph on Gaspard Dughet (Paris, 1986), does not record any work of this subject by, or even mistakenly attributed to Dughet, save the painting in distemper that has never left the Galleria Doria Pamphilj in Rome, which she attributes to Crescenzio Onofri (R.200, p.339)], so that the ascription to him of Russel’s picture was probably mistaken, and hence abandoned. Another – albeit faint – possibility, simply because Lord Egerton bought at least two other pictures (the Annibale/Ludovico Carracci of the Holy Family with Saint Francis, and the Antonio Carracci of Venus discovering the dead Adonis) from the sale, also using Waters as his agent, is that it was lot 35 in the sale by William Angerstein of pictures from Woodlands, Blackheath, Christie’s, 20 June 1874, as A. CARRACCI Mercury and Argus (£24.13.6.). Again, no authentic Carracci – or even Carracciesque? – picture of this subject is known. Yet a further possibility is that it was the [?Mercury and] Argus by Salvator Rosa mentioned by Lady Morgan (Rosa, 1824, vol.II, p.370) as in the Sir H. H. Aston Bruce Collection in 1824, in which case, ex-coll. of the Earl-Bishop? The transcription of a manuscript list of the pictures at Downhill of around1822, gives the full title of this as Landscape with Mercury, Argus, and Io (W. Drawing Rm, no.17). But it is not clear how it would have passed from Downhill to Tatton, since pictures at the former seem mostly to have been lost in the fire that gutted it in 1851, whilst those that survived (chiefly family portraits, in any case, and not certainly previously at Downhill) were not sold until the 1920s and 1950s. Bequeathed by Maurice Egerton, 4th Baron Egerton of Tatton (1874 - 1958) to the National Trust with the house, gardens and contents of Tatton Park