The Stoning of Saint Stephen 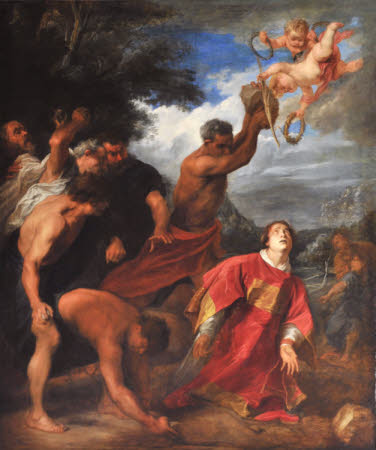 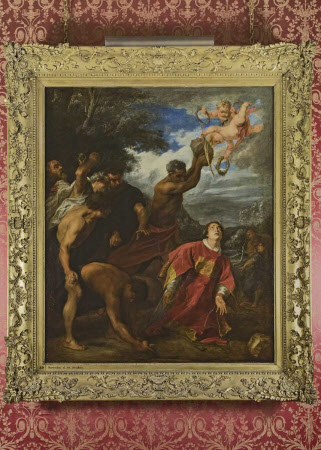 The celebrated Flemish painter Van Dyck is famous for his striking portraits of King Charles I and his court, but before he lived in England he was painting religious works in Antwerp and Italy. This picture shows the violence and pathos of the moment just before the saint’s death. It depicts the biblical scene told in the Acts of the Apostles. Stephen, one of the early Christian martyrs, is wearing the red and gold dalmatic robes of a deacon, and is about to be stoned to death by a mob outside Jerusalem. The foremost persecutor is Saul who was later converted to Christianity and became the great missionary Paul. Two copies after this painting are in Sicily which suggests that this original painting was once there where Van Dyck had stayed before it was taken to Madrid in 1628. It came to England during the Peninsular wars, after the fall from power of the Spanish king in 1808.

Oil painting on canvas, The Stoning of Saint Stephen by Sir Anthony Van Dyck (1599-1641), 1623-25. Described in the Acts of the Apostles (6 - 7:57-60), the picture depicts the saint in red and gold dalmatic (the vestments of a deacon) robes, kneeling on the right, landscape background, two putti in the sky. He is stoned by five men, the foremost is Saul. Two copies after this painting are in Sicily which suggests that the painting was once there.

Possibly 'painted at Venice by the immortal artist, for the Spanish chapel at Rome' [San Giacomo degli Spagnoli] although this probably erroneous - possibly painted for Fabrizio Valguarnera (d. 1632), Palermo and brought to Madrid in 1628; in the church of San Pascual Bailon, Madrid in 1776/1793 (probably presented by Don Juan Gaspar Enriquez de Cabrera, 6th Duque de Medina de Roseci and 10th Almirante de Castilla (1623 -91), whose father may have bought the picture in Italy; removed from the church between 1803 and 1806 by Don Manuel Godoy (1767 - 1851), Chief Minister of Charles IV and 'Prince of Peace', and hung in his palace in Madrid until his fall from power and arrest in 1808; purchased in Madrid in 1808 by the painter George Augustus Wallis (1761 - 1847), acting for the art dealer William Buchanan (1777 - 1864), and bought by Wallis via Germany and France to England in 1813; purchased from Buchanan by the art dealer Alexis Delahante (1767 - 1837), apparently for more than £ 1,000; Delahante sale Phillips, 3 June 1814, lot 77, bought for 700 gns by Wilbraham Egerton of Tatton, MP (1781-1856); thence by descent until bequeathed by Maurice Egerton, 4th Baron Egerton of Tatton (1874 - 1958) to the National Trust with the house, gardens and contents of Tatton Park