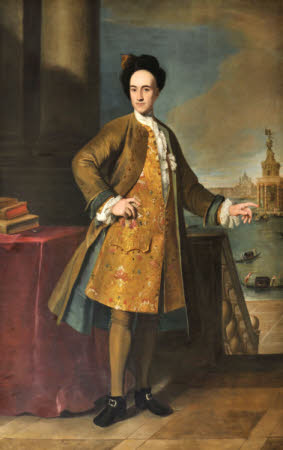 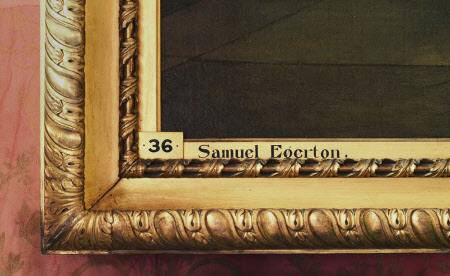 A suave young man in silk stockings and brocade coat, standing by the steps of the Grand Canal in Venice, gazes confidently at us, every inch the fashionable Grand Tourist. He is Samuel Egerton and his is a rare portrait of an Englishmen in the Floating City. He was there in 1730s, working as an apprentice to the merchant, art dealer and later British Consul in the city, Joseph Smith. Egerton’s uncle and guardian, Samuel Hill, who secured his nephew’s position, was an extravagant buyer of works of art which Smith acquired on his behalf. Life working for a high-class dealer in Venice was not all fun for Egerton. In one of his letters home, he refers to the ‘viciousness of the place’. Not only that, but there were temperamental artists to contend with. Joseph Smith was Canaletto’s agent at the time and writing to Egerton's uncle, he complained about the artist’s impertinence and the huge effort in getting him to finish two paintings which Hill had commissioned. All this while Canaletto was still a relatively unknown artist. Egerton was eventually successful in bringing the Canalettos to Tatton Park. He succeeded his childless brother as owner of Tatton in 1738 and one of his most significant projects was the building of a new library, furnished with his uncle’s outstanding collection of books.

Oil painting on canvas, Samuel Egerton (1711-1780) by Bartolomeo Nazari (Clusone, near Bergamo 1699 – Milan 1758), signed Bartolo Nazari Fece in Venezia, probably in 1732. A full-length portrait of a man, turned slightly to the right, gazing at the spectator, standing by a table, right hand on hip, left arm held out, at the top of steps leading to the Grand Canal, with the Dogana and Church of the Zitella seen in the distance; he wears a brocade coat and grey cloak with green lining, black cap and white lace neckcloth. Samuel Egerton inherited Tatton on the death of his elder brother in 1738; married Beatrix Copley and on dying childless devised his estates to his sister, Hester. The portrait was painted in Venice after 1729, while the sitter was apprenticed to Joseph Smith, later British Consul. It was finished by November 1732, but had apparently not arrived at Tatton by June 1733.

Samuel Egerton stands in a conventional setting of terrace and column above the Grand Canal; behind him, featured as a backcloth, is the Dogana and beyond, on the Giudecca, the Church of the zitelle. This rare portrait of an Englishman in Venice was probably painted in 1732 during the time when Egerton was working in the city as an apprentice in a merchant's house. The merchant was none other than Joseph Smith, better known as Consul Smith - which he became in 1744 - the impresario of Canaletto and the founder of a collection that was particularly renowned for the contemporary art it contained. Smith's pictures, acquired by George III in 1762, brought to the Royal Collection an unrivaled group of works by Canaletto. Samuel Egerton, whose period of apprenticeship had begun in 1729, was thus advantageously placed, had he wished to augment the collection of pictures at Tatton, a house to which he succeeded on the death of his elder brother in 1738. However, apart from this portrait his collecting activities seem to have been confined to the intermediary role that he played in the acquisition of two early works by Canaletto (NT 1298196 and NT 1298203) for his uncle and guardian, Samuel Hill. Samuel Hill was not sanguine about buying pictures in Italy. He wrote from Rome in 1738 to his cousin Thomas Hill, 'as to good original pictures I think theres nothing more certain than yt they are not to be bought in this country, for no man here parts with a picture or statue till he has sold his wife and everything else yt can bring him any money.' So it is that at Tatton the bulk of the collection is owed to two later members of the family: Wilbraham Egerton (1781-1856) and his grandson, also called Wilbraham, who became 2nd baron and 1st and last Earl Egerton of Tatton (1832-1909). Their tastes developed on similar lines, with a predominant interest in classical Italian pictures together with an appreciation of the Dutch school.