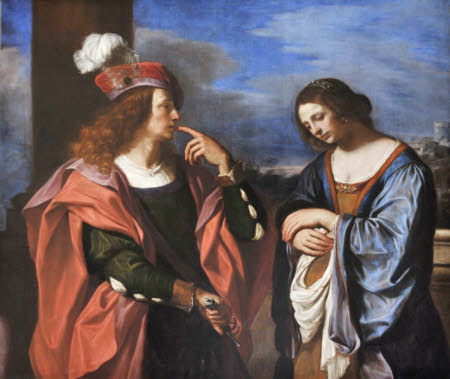 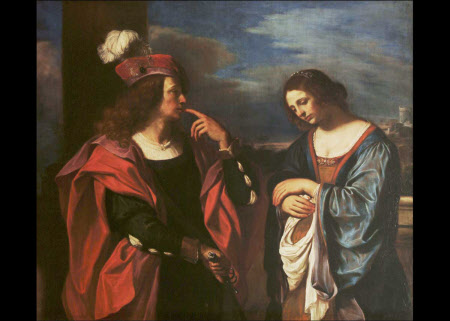 Oil painting on twill canvas, Absalom and Tamar, by Guercino (Cento 1591 – Bologna 1666), 1644. A three-quarter length figures of a man and woman, Absalom, on the left, as a fashionably dressed youth, with a luxurious head of hair, his finger to his mouth in contemplation, his right hand reaching for his sword, eyes the pregnant Tamar in blue robes on the right standing with downcast eyes before him. A castle in the background on the right. As told in the biblical book of Samuel 2: 13 in the Old Teastament, after his full sister Tamar was raped and impregnated by their half-brother, David's eldest son, Amnon, Absalom waited two years and avenged her by sending his servants to murder Amnon at a sheep-shearing feast to which he had invited all the king's sons.

Cardinal Federigo Cornaro (1579-1653), Palazzo Cornaro [now della Stamperia], Rome; Palazzo Cornaro, Venice; Sir George Warrender, 4th Bt; his sale, Christie's, 3 June 1837, lot 90: bought by Wilbraham Egerton. An export seal of Venice is on the back. It is not known when the painting was sold from Palazzo Cornaro; bequeathed by Maurice Egerton, 4th Baron Egerton of Tatton (1874 - 1958) to the National Trust with the house, gardens and contents of Tatton Park