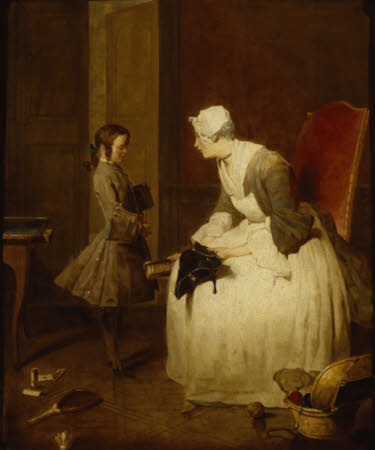 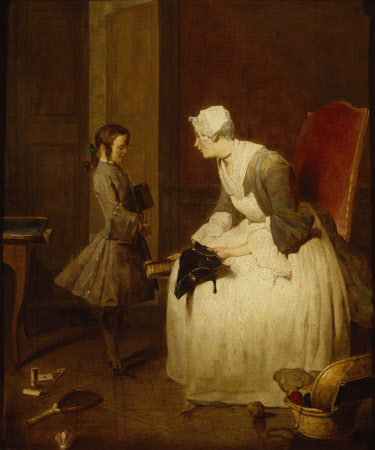 The prime version of this picture (1738: National Gallery of Canada, Ottawa) was called La gouvernante, when it was exhibited and engraved in 1739. The term could mean housekeeper — which is what her apron and work-basket suggest — as well as governess, and the picture is the first of those in which Chardin depicts protagonists of higher social status. This would appear to be the autograph replica that was first recorded in the posthumous sale of Watteau's friend, Antoine La Roque, editor of the Mercure de France, in 1745. It seems to have featured in a London auction five years later.

Oil painting on canvas, 'La gouvernante' by Jean-Siméon Chardin (Paris 1699 – Paris 1779), signed, above middle panel of left door: chardin. An autograph replica by Jean-Siméon Chardin of the picture formerly in the Liechtenstein Collection and now in the National Gallery of Canada, Ottawa, signed and dated 1738. A full-length portrait of a woman, a governess, seated in an interior holding a brush and hat, a young boy, blushing, is standing on the left and there are toys, playing cards and racket and shuttlecock on the floor in the foreground.

DR. CHARDIN (painted in black on plaque at base of frame)