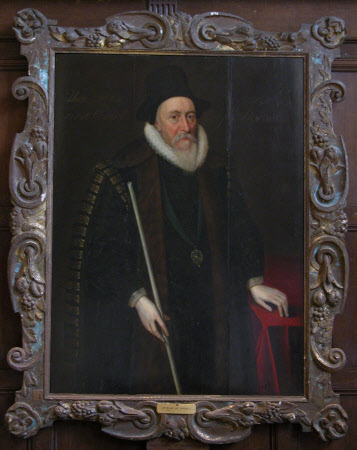 Sir Thomas Sackville, a poet and playwright, was appointed Lord High Treasurer in 1599. Shown here holding the white wand of his office, Thomas was the first Sackville owner of Knole and commissioned several important decorative schemes in the house, such as in the Hall and Great Staircase. It is characteristic that he should have had himself painted by the Serjeant-Painter to the King, John de Critz, who held this position from 1603.

Oil painting on panel, Sir Thomas Sackville, Baron Buckhurst and 1st Earl of Dorset (1536-1608), attributed to John de Critz (Antwerp 1551/2 – London 1642), inscribed in scrolly 18th century-script above: Thos. First Earl of Dorset, circa 1601. A three-quarter-length portrait as an old man of 63, turned to the right, gazing at the spectator, ruff and black hat, and black and gold embroidered robe trimmed with fur of Chancellor of Oxford, and Garter jewel, his Treasurer’s [or Lord High Steward’s? - he was appointed Lord High Steward in January 1601] staff in his right hand, his left hand is resting on a crimson covered table on the far right.