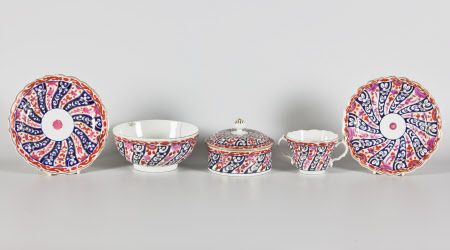 Dessert service, soft-paste porcelain, painted in the Imari palette with underglaze blue, iron-red and gold, after a Japanese prototype, marked ‘Flight’ and crescent in blue, or ‘Flight’ in red, Thomas Flight (proprietor), Worcester, c.1783-92, or printed with ‘Chamberlain’s Worcester, No. 155 New Bonds Street, London, Royal Porcelain Manufactory’ in grey, Chamberlain, Worcester, c. 1816-20. The set comprises twelve plates, two cups, one dish with lid, one slop bowl, two lids and one slop basin; scalloped edges. Note: The design is based on the Japanese ‘whorl’ or ‘ Catherine wheel’ patterns copied at Meissen in Germany in the 1740s and later at Worcester in the late 1750s, where it was known as known as the “Queen Charlotte” pattern. It was very popular and is associated with Queen Charlotte, the wife of George III, who may have acquired a service following a visit to the factory in 1788.