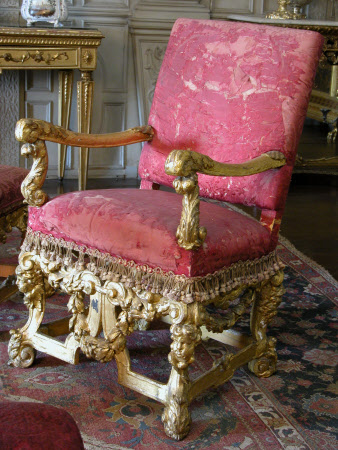 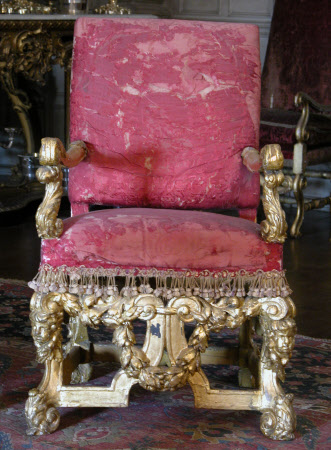 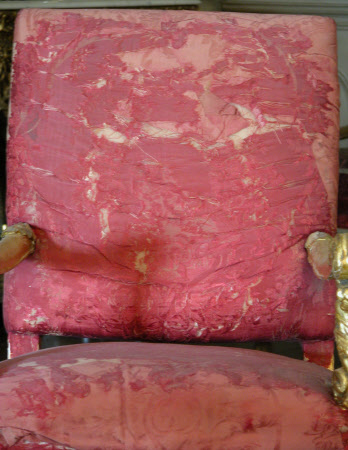 One of a pair of elaborately carved and gilt elbow chairs, c.1690-95, with stuffed seats and backs covered in figured crimson silk. The richly carved frames are adorned with cherubs’ heads at each corner, swags of foliage and acanthus scroll feet. The chairs are part of a larger set also comprising six stools (NT 129492.1-6). The set was either among the royal pieces acquired by the 6th Earl of Dorset as Lord Chamberlain, or purchased by him from one of the French upholsters that he patronised, such as Fancis (or François) Lapiere. As Geoffrey Beard emphasised, the latter was a Catholic, not a Huguenot, and ‘one of the grandest and most accomplished of the French upholsterers working in late seventeenth-century England… He supplied carpets and beds to the Great Wardrobe (charged with furnishing the royal palaces) between 1690 and 1696’ (Beard 1997, p.93). He also supplied a very imposing state bed for William Cavendish, 1st Duke of Devonshire for Chatsworth but moved to the Long Gallery at Hardwick Hall in 1820s (NT 1127772).

Either acquired as a royal perquisite by Charles Sackville, 6th Earl of Dorset in his capacity of Lord Chamberlain to King William III or possibly commissioned directly from Francis Lapiere. Knole and the majority of its furniture were accepted by HM Treasury in part payment of death duties and transferred to the National Trust in 1946.