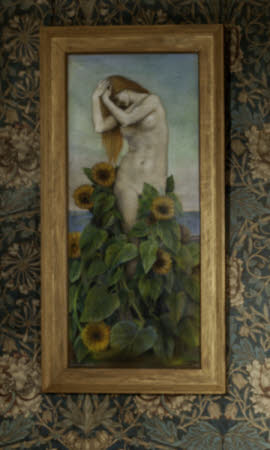 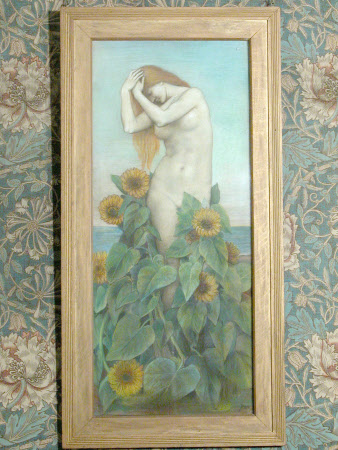 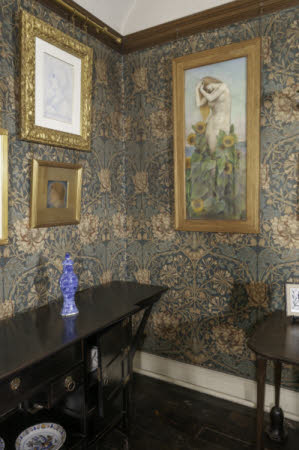 Taken from a Greek myth and related in the Roman poet Ovid’s Metamorphoses IV, Clytie was the daughter of a king of Babylon who was forsaken in love by the sun-god Apollo (Helios). He had turned his attentions to her sister and in jealousy Clytie told her father which causes Leucothea to be buried alive. Grief struck she stays outside night and day; her face always turning towards the sun. Her limbs take root, so she is transformed, according to the legend, into a sun-following Heliotrope (a violet) which was later interpreted as the common sunflower. This is a study for an oil painting now in a private collection. The original owner of the oil, Reverend Tugwell, wrote to the artist requesting the ‘removal of two leaves of the sunflower’ to which she explained that it was painted in a peculiar method and varnished so it would be damaged irrevocably.

Pastel on paper, Clytie with Sunflowers by Evelyn de Morgan (London 1850 or 1855 - London 1919), monogrammed and dated, lower right: EP 1885. A nude female with long hair is shown standing with her hands on her head, her legs rooted amid sunflowers growing up around her and covering her legs.

Clytie was an ocean nymph who fell in love with Apollo but when he deserted her she was changed into a sunflower which turns it head to follow the sun on its daily course from east to west. As the sun is setting Clytie's head droops and so do the flowers. Sunflowers were an important symbol of the ‘art for art’s sake’ Aesthetic Movement. “There is no flower so purely decorative as the sunflower (…) it is so perfectly adaptable for decorative art (…) because its form is definite and perfect” said champion of the movement, playwright Oscar Wilde. Sunflowers are also frequent motifs in Japanese and medieval culture-both of which inspired Aestheticism. Both Evelyn and her husband ceramicist William were inspired by the Aesthetic Movement and incorporated sunflowers in their art. The number of drawings of Jane Hales nude has led some to question the nature of their relationship. It was not unusual for women in this period to have passionate friendships and women's same sex relationships did not arouse the same censure as men's. Jane Hales was buried next to Evelyn and William De Morgan, this suggests a close relationship between Jane and the family, far beyond that of employer and employee. The later painting that this is a study for was done in what the artist and her husband, the ceramicist William, called 'The Process', which he invented but she only used twice, whereby colours were ground in glycerine and spirit which never dried so the glycerine had to be sucked from the back of the picture and was finished with a transparent oil-colour.

Spencer Pickering (1858 - 1920); bought by the National Trust from Mrs Phyllis Pilkington (neé Pickering, neice of Spencer) 1971; at Lanhydrock until transferred to Wightwick Manor in January 1998