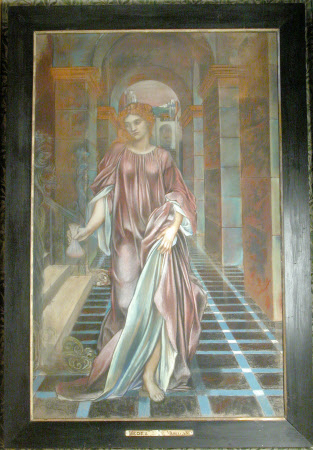 Pastel on paper, Medea by Evelyn De Morgan (London 1850 or 1855 - London 1919), circa 1889. According to Greek legend she was the wife of Jason from Colchis. After he deserted her for a Greek wife she took revenge. She features in both the Greek Euripides' eponymous play and in the Roman poet Ovid's Metamorphoses. She is seen her in crisp pink flowing robes walking through a classical interior holding a magic potion in a vial in her right hand. The oil version of this picture is in the Willaimson Art Gallery and Musuem, Birkenhead and is initialled and dated, lower left: EP 1889.

This is a smaller version of, and probably a study for, the oil painting dated 1889 in the collection of the Williamson Art Gallery and Museum, Birkenhead. Drawing was essential to De Morgan's work: like Burne-Jones she made large numbers of studies and highly finished drawings for pictures. The painting was exhibited at the New Gallery in 1890 with a quotation from William Morris' The Life and Death of Jason (1867): ".........................................day by day She saw the happy time fade fast away; And as she fell from out that happiness, Again she grew to be the sorceress, Worker of fearful things, as once she was," The subject is from the Greek story of Jason and the Argonauts. The sorceress Medea fell in love with Jason and helped him take the golden fleece from her father King Aeetes of Colchis. She fled with Jason, delaying her father in pursuit by cutting up her brother and throwing pieces into the path of the ship. Medea's marriage to Jason ended when he abandoned her and their children to marry the Corinthian princess Glauce. Medea sent her a gift of a dress which burst into flames when she wore it and killed her. Medea then murdered her own children. Medea is shown plotting her revenge, holding the phial of liquid which will ignite the dress. This pastel version is less detailed than the oil, with the elaborate architectural setting suggested rather than fully worked up, and more limited colour. Jan Marsh and Pamela Gerrish Nunn, 1997 have analysed the painting thus: "Forsaken by the calculating Jason, Medea turns once more to her magical powers for revenge, more in sorrow than in anger. She is dressed as a splendid queen in colours symbolising royalty and innocence, but her unhappiness is clear, suggested by the echoing marble halls through which she wanders. To counter her abandonment she turns to sorcery, the phial of poison meant for her rival Glauce smoking portentously in her hand. De Morgan rewrites the murderous mother of the classical world as a wronged woman whose magical powers should have attracted respect, not the cruel dismissal she received from the faithless Jason. De Morgan utilises not only Morris' but also Ovid's characterisation of Medea, from Heroides XII, a source used by many contemporaries for a range of classical female figures........ She had already treated the subject in a sculptured head, (1880) and made careful studies for this painting.From early in her career De Morgan had used this format of a long vertical containing a single full-length female figure (e.g. Cadmius and Harmonia, 1877, De Morgan Foundation), but this is the first of several sophisticated canvases in which she elaborates the settings and narrative contexts for these carefully selected heroines. The closest of these to the present work in purely visual terms is The Thorny Path (1897, Tatham Art Gallery, Peitermaritzburg). This sequence of figures shows the artist moving on from the work which may have been her chief original inspiration, Burne-Jones' Hope (1871, Dunedin Public Art Gallery) to the formulation of a gallery of female exemplars of the human spirit's trials and triumphs."