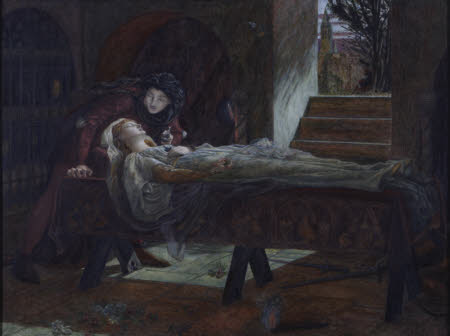 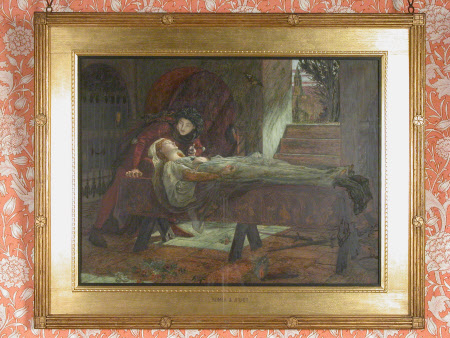 "Eyes, look your last! Arms, take your last embrace! And lips, O you, The doors of breath, seal with a righteous kiss A dateless bargain to engrossing death!"

Watercolour and gouache on paper, The Tomb Scene from Shakespeare's 'Romeo and Juliet' by Lucy Madox Brown, Mrs William Michael Rossetti (b. 1843), signed with monogram and dated "70" [1870]. Juliet is lying on the tomb (Act V: sc.3) with Romeo bending over her; the light falls on their faces through an open doorway disclosing a view of a church tower and trees.

'Romeo and Juliet' is generally considered to be the finest of Lucy Madox Brown's few exhibited paintings. In 1871 the critic of The Times concluded "with all its very obvious faults, this is a drawing of rare sentiment, and the execution, also, shows uncommon power and warrants high expectations of the young artist's future." One of several pictures by the artist of young lovers from Shakespeare, it shows Act V Scene III of the play. Romeo has entered the tomb intending to join Juliet in death, unaware that she is in a drugged sleep. Challenged by Paris he has fought and killed him: their swords lie beneath the bier and the dead man can just be seen lying on the far right. In Romeo's hand is the poison he is about to take. Juliet will wake to find him dead, and kill herself. The literary subject, careful depiction of the mediaeval setting and the details of the text, and the rich but subtle colouring can be seen in other late Pre-Raphaelite work by artists such as Marie Spartali Stillman. But Lucy Madox Brown's pictures have a much more powerful character and intensity of feeling comparable to her father's work. The very strong composition, dominated by Juliet on the bier, and with the figures tightly enclosed within a restricted space (a device often used in Pre-Raphaelite art), is characteristic of her major works. The subject and treatment are dramatic and emotional - though not melodramatic - rather than static. Romeo's face and awkward position bent low over Juliet convey the tragedy of the situation. Light and shadow are exploited for maximum dramatic effect: light from the door breaks through the gloom to highlight Juliet's face. As Lucy was largely taught by her father Ford Madox Brown similarities with his work are not surprising. The tragic theme and composition appear to be related to to his watercolour 'The Corsair's Return' (1870-71) which he was working on while Lucy was painting Romeo and Juliet. Both have a strong horizontal emphasis provided by the full-length figure of an apparently dead girl in the foreground, (although she lies right to left in Ford's picture). In both the lover is silhouetted against arches on the far left, though Romeo bends over Juliet while Conrad looks across the room. The scene is set in a dark enclosed chamber, with the world outside glimpsed through a small opening.The picture is in a 'Rossetti' frame. The Pre-Raphaelite artists took great care over the framing of their work, often designing or specifying special types of frame. Rossetti and his circle often used this type of frame made up of simple flat gilt sections ornamented with decorative discs of geometric patterns inspired by a variety of sources including Japanese porcelain and prints.