'A Day's Pleasure' (previously erroneously called 'Reading the Will') 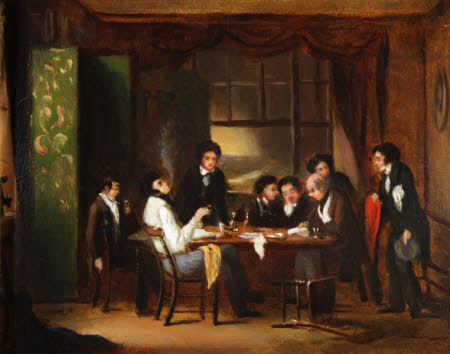 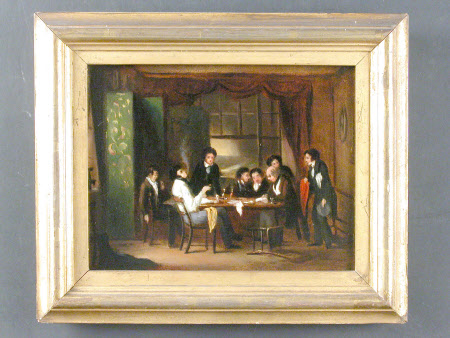 Oil painting on panel, A Day's Pleasure by Edward Prentis, RA (Monmouth 1797 - London 1854). Prentis specialised in painting very popular contemporary domestic genre pictures with titles such as 'The Sick Bed' and 'The Price of the Game'. A newspaper obituary stated "His collected works would furnish a striking pictorial epitome of all that is most to be admired and most deplored in the hearths and homes of England." He exhibited at the Royal Academy in 1823, but from its foundation in 1825 until 1850 all his exhibited work was shown at the Society of British Artists. This is probably a preparatory sketch for the finished picture which was published as a mezzotint in 1842. It has previously been incorrectly attributed to both Augustus Egg and to C.R. Leslie under the title 'Reading the Will'. Its subject is the presentation of the bill being studiously ignored by most of the guests. The mezzotint is inscribed:"Men laugh and riot, till the feast is o'er, Then comes the reckoning - and they laugh no more." Previously catlogued as "The Reading of the Will by Edward Villiers Rippingille (King’s Lynn 1798 – Birmingham 1859), 1850" Dimly lit interior scene of gentlemen seated around a table placed before a large window looking over a will, others standing, one chair up turned.

With Agnews after 1911; part of the contents of Dorneywood, Buckinghamshire, given to the National Trust by Lord Courtauld-Thomson in 1942; subsequently transferred to Carlyle's House, Chelsea; brought to Wightwick 1978 by Martin Drury, Historic Buildings Secretary of the National Trust