Love among the Ruins 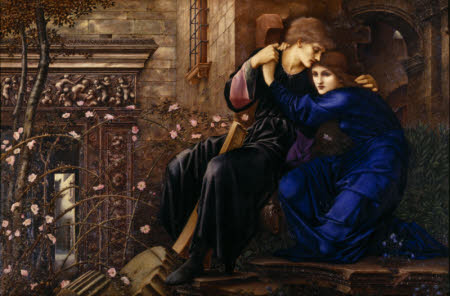 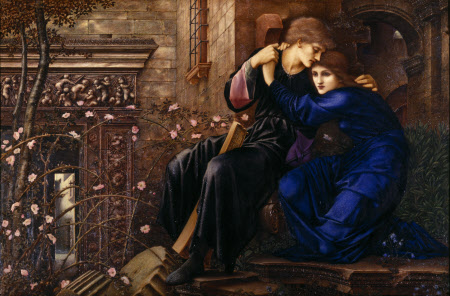 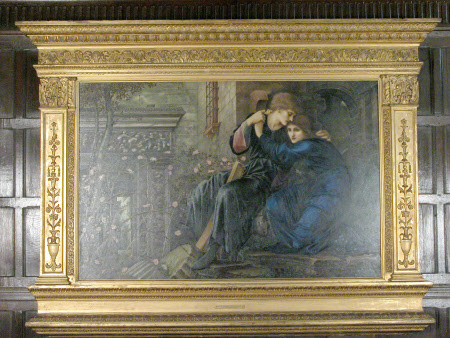 Seated among the decaying ruins of a building overgrown with roses are two lovers. The man comforts a woman dressed in a deep shade of blue. The mood is melancholy, almost sombre, and the lovers embrace as if retreating from the world, their love a potent force in an otherwise crumbling civilisation. This is the most important late painting by the Pre-Raphaelite artist Sir Edward Burne-Jones (1833–98) and is based on a watercolour he produced about 20 years previously. The subject was inspired by ‘Love Among the Ruins’, a poem by Robert Browning (1812 –89). Published in 1855, the poem features two lovers in a ruined city, which allowed the painter to acknowledge the Renaissance artists who had influenced him. The original composition was painted shortly after the end of Burne-Jones’s passionate affair with the Greek artist and sculptor Marie Zambaco (1843–1914), who had become his muse.

Oil painting on canvas, Love Among the Ruins by Sir Edward Coley Burne-Jones (Birmingham 1833 - London 1898), signed and dated, bottom right: EBJ 1894. Two lovers, the man in a rich navy velvet robe, the woman in indigo, embrace while seated together on a stone capital within the ruins of a Renaissance building. At their feet is a section of broken fluted column, overgrown with briar rose. A doorway leading into the building can be seen at left. The architrave is carved in rich relief, the lintel frieze with frolicking putti, the pilaster with rosettes. An interior façade with doors and windows, can be seen through the doorway. Verso with two manuscript notes written by Burne-Jones: 'CAUTION This oil picture was finished in the months of August 1893 to April 1894, it will not be safe to varnish it until FIVE YEARS have passed from this date. It may then be varnished with MASTIC./ Edward Burne Jones.' 'This oil painting of 'Love Among the Ruins' is the same design as the one of the same name which I painted in watercolours, twenty one years ago, but which was destroyed in August last year./ The present picture I began at once, and have made it as like as possible to the other, and have finished it this day. APRIL 23. 1894. Edward Burne Jones.'

This painting, one of Burne-Jones's major late works, is a replica in oils of the original gouache (watercolour and bodycolour) version of 1870-73, which was his first work exhibited abroad and among his most admired pictures. The composition was also used in a miniature forming part of William Morris's illuminated manuscript of Edward Fitzgerald's translation of The Rubaiyat of Omar Khayyam. In August 1893 the large gouache (private collection) was sent to Paris for exhibition at the Societé National des Beaux Arts. It was severely damaged while at a photographer's studio (Goupil) for reproduction in photogravure: the highlights were treated with egg white, and the paint came away. It was a severe blow to Burne-Jones, who, at the time, was already unsettled and unhappy. The picture had considerable emotional charge for him: it was completed after the breakup of a tempestuous relationship with the great Greek beauty Maria Zambaco (London 1843 - Paris 1914), who the female model may represent. He wrote to his wife Georgiana, ‘It is quite irreparable, but it is life, and all in the bargain - I don't know who made the bargain.’ (Fitzgerald 1975, p. 250) The original was not in fact destroyed; it was subsequently restored by the artist himself. A friend of Burne-Jones, Stopford Brooke, said of this later version, ‘It's better painted, but the ineffable spirit of youth which was in the other, is not there.’ Burne-Jones agreed, ‘O that is true and it will not come back again’. The professional models in both the gouache and subsequent oil – the present picture – have been variously identified as Zambaco, the Italian Antonia Caiva (Christie’s, 11 July 2013, lot 3), and, perhaps most persuasively, Bessie Keene (b. 1866/69), who also posed for Burne Jones’ The Golden Stairs (Tate N04005) and Vespertina Quies (Tate N05176). The male models, either Gaetano Meo (Naples 1849 - London 1925) or Alessandro di Marco, were equally sought after among Victorian artists: the former can be seen in several works by Burne Jones, Simeon Solomon, and William Blake Richmond. 'Love Among the Ruins' shows how far Burne-Jones had moved away from his Pre-Raphaelite origins. Following visits to Italy in 1871 and 1873, his work became increasingly influenced by the Italian High Renaissance artists the Pre-Raphaelites had despised, particularly Michelangelo, Leonardo Da Vinci, Botticelli, Raphael and Mantegna. This is clearly reflected in the drapery and pose of the figures, and the Renaissance classicism of the architectural setting. The distant perspective view through a doorway contrasts with the tightly enclosed shallow space characteristic of many of Burne-Jones' pictures. The classicism, subtle colouring, and dream-like poetic quality are far away from the bright colours, medievalism and intense realism of Pre-Raphaelite paintings. Although the title is shared with Browning's poem Love Among the Ruins (1855), the picture is not an illustration of it. The subject reflects the increasing importance in the artist's work, just as in the Renaissance, of classical, pagan themes. It comes from the Hypnerotomachia Polyphilii written by Fra Colonna in the 15th century. The book takes the form of a medieval romance full of adventures and allegories but with classical setting, details and language. In a dream Poliphilus sets out on a quest for his lost love, Polia, and at last finds her. The lovers are joined at the altar of Venus and a miraculous briar rose begins to grow. For ultimate happiness they must travel to the Isle of Cythera where they wander through ruins and graves of those who have died for love. But it is all a deception: the dreamer awakens to disappointment. The picture's theme is thus the ephemerality of love and youth, showing the lovers among the ruins of Cythera with the briar rose around them. Its melancholy beauty epitomises Burne-Jones' work: he said that a picture was ‘a beautiful dream of something that never was and never could be’. It has an obvious similarity with the 'Briar Rose' series of paintings of the Sleeping Beauty legend (1873 and 1890) which are at Buscot Park, Oxfordshire. (adapted from author's unpublished property catalogue, Stephen Ponder, Wightwick Manor, circa 1995)

Verso: 'CAUTION This oil picture was finished in the months of August 1893 to April 1894, it will not be safe to varnish it until FIVE YEARS have passed from this date. It may then be varnished with MASTIC./ Edward Burne Jones.' Verso: Hand-written note by Burne-Jones on the back of the picture: 'This oil painting of 'Love Among the Ruins' is the same design as the one of the same name which I painted in watercolours, twenty one years ago, but which was destroyed in August last year./ The present picture I began at once, and have made it as like as possible to the other, and have finished it this day. APRIL 23. 1894.Edward Burne Jones'.