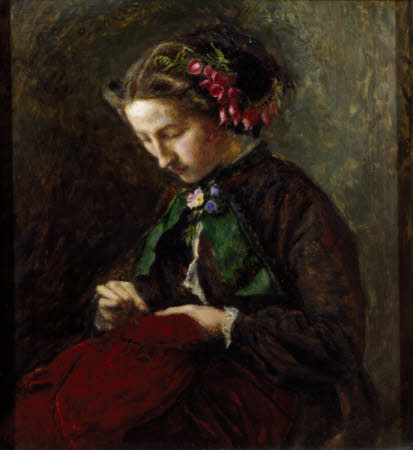 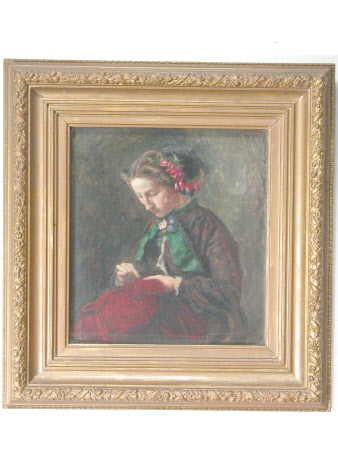 Oil painting on panel, Euphemia 'Effie' Chalmers Gray, Mrs John Ruskin (1828-97) with foxgloves in her Hair (The Foxglove) by Sir John Everett Millais (Southampton 1829- London 1896), signed JM [in monogram] and dated 1853. A half-length portrait of Effie Ruskin, seated sewing to left, wearing a black dress with green ribbons about the neck finished with a dog rose and harebells, her black lace cap trimmed with foxgloves. She sews a crimson velvet garment.

An important example by a Pre-Raphaelite artist of small-scale, intimate portraiture. In the summer of 1853 Millais went on holiday with the Ruskins in Scotland, staying at Brig o' Turk in the Trossachs for nearly four months. There Millais began work on his full-length portrait of Ruskin standing on a rock in the stream at Glenfinlas. A companion portrait of Ruskin's wife Effie was also proposed, but the idea was eventually abandoned. During the stay Millais made a large number of paintings and drawings of their activities, many of them showing Effie. This portrait of her, seated sewing, is one of them. On 14 July Ruskin wrote to his father: 'Wet weather again - but Millais has painted a beautiful study of Effie with foxgloves in her hair' and on 19 July that Millais 'has been making me innumerable presents of little sketches and a beautiful one of Effie with foxgloves in her hair - worth at least £50'. The Ruskin's marriage was unhappy, and Effie and Millais fell in love during the holiday. In 1854 Effie obtained an annulment; she married Millais later that year. Millais never presented the picture to Ruskin. On 21 or 22 July 1854, after the annulment, Millais wrote to Effie: 'Bye the bye what am I to do with the little portrait I did of you with the foxgloves? I have never sent it to him, and now I suppose it is impossible and yet I do not like to keep it after giving it him'. (adapted from author's unpublished property catalogue, Stephen Ponder, Wightwick Manor, circa 1995)

Painted when the Ruskins were at Glenfinlas in July 1853. Millais and his brother were staying nearby and Millais did a number of sketches for portraits of Effie Gray and Ruskin during the period. This picture was intended as a gift from Millais to Ruskin, to whom Effie was still married, but was still in the artist’s hands a year later when the Ruskins’ marriage was annulled (see Funnell, Millais Portraits, pp.87-88); thence by descent, until it was bought by Lady Mander from Sir Ralph Regnault Millais, 5th Bt (1905–1992), a decendant of the artist, for Wightwick in 1949; transferred to the National Trust on the death of Rosalie Glynn Grylls, Lady Mander (1905 - 1988).