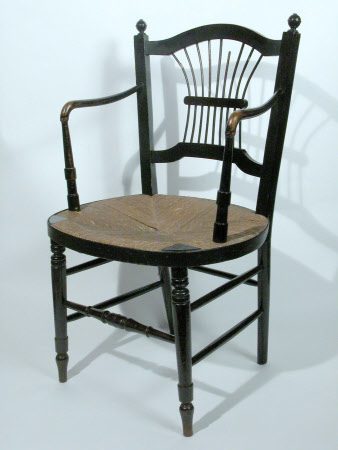 An ebonized beech and rush 'Rossetti' armchair, English, design attributed to Date Gabriel Rossetti (1828-1882), manufactured and retailed by Morris & Co., circa 1870-1900, the curved top rail joined by numerous curved spindles supported on a lower horizontal shaped splat, the spindles are waisted with a small horizontal band, the uprights with small turned finials, the armrests curving over to the turned supports which extend down into the circular rush seat, the seat encircled with a thin rail, the front legs of turned and tapering form with small turned feet, the front legs joined by a turned stretcher, the rear legs of plain circular form , slightly splayed, the rear and front legs joined by two circular stretchers, the rear legs joined by a single stretcher. This pattern of chair was made and sold by Morris, Marshall, Faulkner & Co. (and later Morris & Co.) from the 1860s until the 1920s. The form of the chair is thought to have been inspired by an early 19th century chair owned by Dante Gabriel Rossetti, probably from rural France.