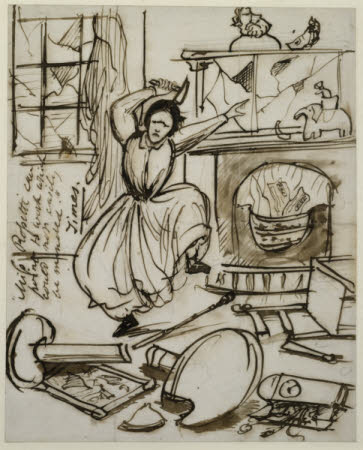 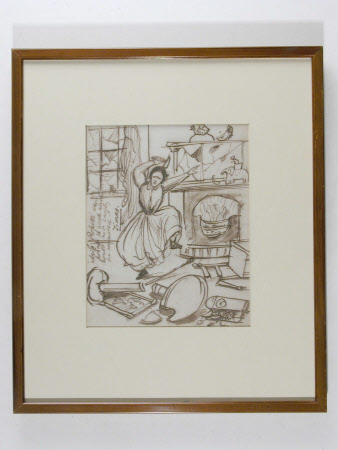 Pen and wash on paper

Pen and wash drawing, Christina Georgina Rossetti (1830-1894) in a Tantrum and destroying the Contents of a Room by Dante Gabriel Rossetti (London 1828 - Birchington 1882), 1862. Pen and brown ink and wash illustration to a remark in a review on the subject of Christina Rossetti's poetry. She is shown breaking furniture and china with a hammer. Inscribed: "Miss Rossetti can point to work which could not easily be mended." Times." Rossetti's sense of humour is reflected in many drawings and caricatures. This one was inspired by The Times review of Goblin Market and Other Poems (published in 1862) quoted in the inscription. The reviewer meant that the work was so good that it could not be amended or improved. Rossetti probably drew it to help his sister cope with the ordeal of reading the reviews of her first published collection. Christina is shown in a wrecked drawing room waving a hammer and pointing to the remains of the overmantel mirror. Rossetti is making fun of her temper, as she did herself; in a letter of 1864 concerned with her brother's comments on a poem she referred to her "six well-defined....paroxysms of stamping, foaming, hair-uprooting" (presumably not literally!).

Charles Fairfax Murray; by descent to his son Arthur R. Murray; Sotheby's 15 February 1961, part of lot 6 (an album of drawings and sketches mostly by Elizabeth Siddal), purchased by Sir Geoffrey Mander, £170 the lot; transferred to the National Trust on the death of Sir Geoffrey Le Mesurier Mander (1882-1962)

Miss Rossetti can point to work which could not easily be mended. Times. (written in ink)