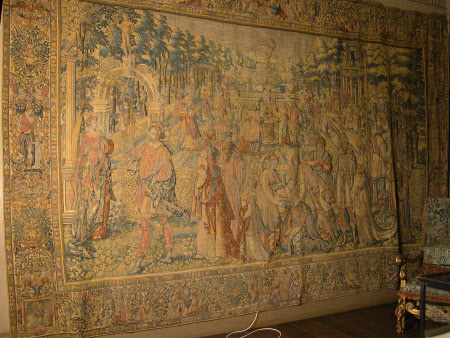 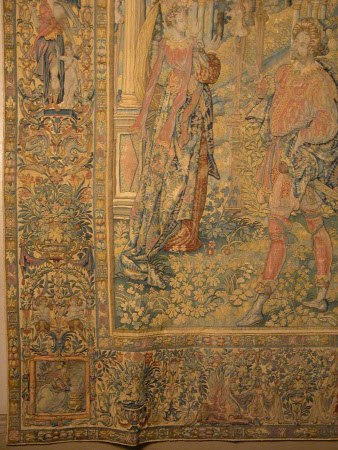 The three tapestries in the Venetian Ambassadors’ Room at Knole are among the most important in the National Trust’s collection. They are rare survivals of the work of François Spiering, a master weaver who emigrated from Antwerp to the newly-founded Dutch Republic at the end of the sixteenth century and went on to produce some of the finest tapestries in Europe. The design is attributed to Karel van Mander. They seem to have formed part of a large consignment of tapestries acquired by the 6th Earl of Dorset from Whitehall Palace in 1695, soon after the death of Queen Mary II (1694). They depict scenes from the popular chivalric romance Amadis de Gaule and from the Greek myths. François Spiering’s extraordinarily detailed work, dense thread count and artistry make these the finest tapestries of their type in the National Trust.

Tapestry, Oriane Passing the Magical Love Tests, from the workshop of François Spiering, Delft, c. 1590-1610. In the foreground richly dressed couples walk through a garden, with a young woman in the centre falling to the ground (struck by an invisible force because she is not beautiful enough to enter the enchanted garden). On the left is an archway with a statue holding a horn above it – the first test to enter the enchanted garden. Beyond there is a formal garden with a hedge-lined walkway leading to a fountain and the statue of Venus in the centre. Venus herself hands the Golden Apple to Oriane. In the background, is a labyrinth with a Colossus, a golden statue holding a burning lamp in the centre. To the left of the garden there is woodland with exotic animals, and to the right Apolidon’s marble palace, towards which pairs of lovers slowly make their way. Adamis and Oriane are seen breaking the spell (cloud of smoke) and entering the magical palace. In the distance there is a landscape with mountains at either side. The tapestry has deep borders decorated with foliage, scrollwork and fantastic creatures including sphinxes. In the upper centre there is a reclining figure of Jupiter carrying a sceptre and a thunderbolt and accompanied by an eagle with a set of scales in its beak, and there are figures of Venus and Cupid in the left border and Minerva on the right. At the centre of the lower border is Juno accompanied by her emblem of a peacock. In the corners are small scenes with allegories of the four seasons. At the upper edge of the lower border the tapestry is signed in latin ‘FRANCISCVS SPIRINGIVS FECIT’.