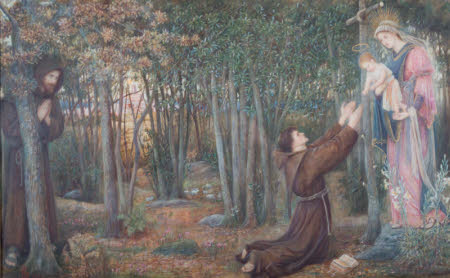 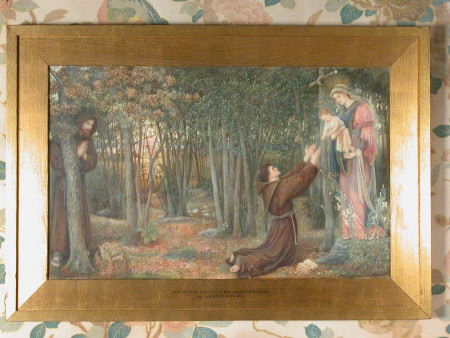 This vision of the Virgin in a coppiced woodland is taken from a 14th-century florilegium on the life of Saint Francis of Assisi. It depicts the apparition of the Virgin to the 13th-century Franciscan monk, Friar Conrad of Offida. Conrad is shown kneeling at Mary's feet, reaching out to the Christ Child in her arms. Another monk, Friar Peter, is depicted clasping his hands in prayer at the far left. Marie Spartali Stillman was one of a small number of professional female artists working in Britain during the second half of the 19th century. Her opaque watercolour technique is characteristic of the Pre-Raphaelite circle, with whom she was closely affiliated.

Watercolour, bodycolour and gold paint on paper, How the Virgin Mary came to Brother Conrad of Offida and laid Her Son in his arms by Maria Spartali Stillman (Middlesex 1844 – London 1927), signed with monogram and dated: 92 [1892]. A wood scene with Virgin Mary to right lowering baby into the hands of a kneeling Brother Conrad, additional monk to left behind a tree.

The subject is the most important event in the life of the Italian Saint Conrad, a Franciscan monk born near Ancona about 1240. His companion on his travels, Blessed Peter of Treja, is shown on the far left watching from the edge of the wood. The lives of saints provided subjects for a number of Marie Spartali's works, including The Childhood of Saint Cecily (1883), The Vision of the Good Monk of Solfiano (1892) and Saint Francis Blessing the Pigeons he has Freed (1902). The Italian mediaeval subject and setting are characteristic of Spartali's work. Equally distinctive is her use of the Pre-Raphaelite technique of dense, opaque watercolour to create subtle colour harmonies, here predominantly greens and browns. The flat, frieze-like composition with the figures all set on the same plane in the foreground can be seen in many of her figure groups, reflecting the influence of her study of Renaissance, especially 15th century Florentine, art during her residence in Italy. Jan Marsh and Pamela Gerrish Nunn have pointed out the resemblance of the composition to The Assassination of Saint Peter Martyr of circa 1510 by the Venetian artist Giovanni Bellini (National Gallery, London), which is dominated by its woodland setting. Spartali was living in Rome at the time she was working on Brother Conrad. She wrote to Burne-Jones seeking advice about both it and The Good Monk of Solfiano, sending him sketches for comment. He wrote of Brother Conrad: "the kneeling monk and Virgin & Child only want such change as nature will give you when you begin to make drawings - if the Virgin leaned forward a little to trust the babe safely it might be better - no, she is better upright - and the monk's hands are a little awkward but it is only where nature will at once set you right - this ought to be a lovely little picture and full of care and delight to you and I don't know how it could go wrong anywhere - and you know a wood whose green background is all ready for you - get both done for May - and send me over the tracings later on for final correction and warning...." [Marsh and Nunn 1989 pp 104, 106]. There are affinities between Brother Conrad and Burne-Jones's The Merciful Knight of 1863 (Birmingham Art Gallery). One of his favourite early works in the same opaque watercolour technique, it shows a comparable incident from the life of another mediaeval Florentine saint, also in a woodland setting with symbolic flowers. In Brother Conrad the white lilies are the flower of the Virgin, a symbol of purity. Glimpsed through the woodland is a Tuscan landscape with a tower in the distance. Spartali's husband William Stillman was the model for Brother Peter on the left.