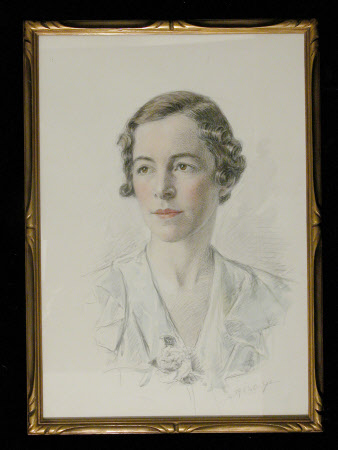 Watercolour and charcoal on paper

Watercolour and charcoal drawing on paper, Rosalie Glynn Grylls, Lady Mander (1905-1988), signed A.H. Collings, circa 1935. A head-and-shoulders portrait of Lady Mander, charcoal drawing with colour washes. Looking out slightly to left, wearing blue-green dress with flower. A.H. Collings was a painter of figure subjects and portraits. He was born in London, where he trained and worked. He exhibited at the Royal Academy, the Royal Institute of Painters in Watercolour, the Royal Society of Portrait Painters, the Fine Arts Society, and the Paris Salon where he was awarded a gold medal in 1907.Rosalie Glynn Grylls, Lady Mander (1905-1988) was Liberal parliamentary candidate for Reading in the 1929 general election at which her future husband won his seat. She married Geoffrey Mander in 1930. She became well known as an author of biographies and other books and articles, and particularly as an authority on the Pre-Raphaelites, especially Rossetti. This conventional portrait is an accurate likeness but far less revealing of Rosalie Mander's character than Topolski's portrait.

Sir Geoffrey and Lady Mander; transferred to the National Trust on the death of Sir Geoffrey Le Mesurier Mander (1882-1962)