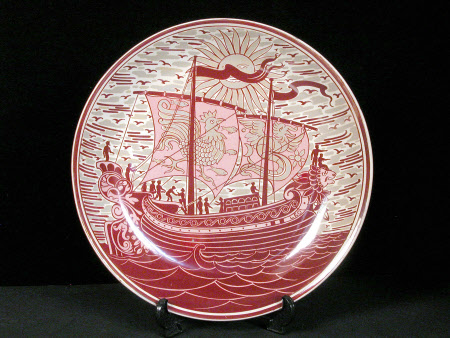 The theme of the sea was a major source of inspiration for William De Morgan, with galleons being one of his favourite motifs. The galleons are often depicted as ships of the imagination, in full sail with overstated flags and banners. The passengers can be seen on deck looking out into the distance, surrounded by stylised waves.

William Frend De Morgan (1839 – 1917) was one of the most important potters of the late nineteenth century, an innovator in both design and technique. His wide range of design sources is matched by his interest in different potting and glazing techniques. The theme of the sea was a major source of inspiration for De Morgan’s Arts and Crafts ceramics and his wife Evelyn’s paintings. Galleons were one of De Morgan’s favourite motifs, developing eighteen distinct designs. The design of the ships were inspired by Medieval and Tudor ships shown in manuscript illustrations such as those carrying the hero’s of Morte d’Arthur, or the warring kings of Froissant. De Morgan’s galleon designs are distinctive for their use of stylised waves, giant fish, dolphins and sea monsters. These are ships of the imagination and are often in full sail with overstated flags and banners, being of a more decorative nature rather than sea-worthy. Often, silhouettes of passengers can be seen on deck. William De Morgan was credited with having rediscovered the lost art of lustre production, characterised by a reflective, metallic surface found in Hispano-Moresque pottery and Italian majolica. Having been educated in the fields of science and chemistry due to the influence of his father, De Morgan experimented with different types of glazes and lustre. What makes lusterware so unique is a fine layer of metal film deposited on the surface, creating an iridescent effect. De Morgan’s technique involved painting with metallic oxides and controlling complicated firing conditions in the kiln which was quite hazardous. This did not deter De Morgan from reintroducing the technique; he had his fair share of accidents during experimentation, once setting fire to the roof of his studio in his home in London. His efforts were later paid off by lusterware receiving a surge in popularity during the Victorian period. Though De Morgan’s business was not financially a success, the tiles that he produced were much appreciated in the nineteenth century and appeal today to a growing group of collectors and ceramic experts.

Bought at Sotheby's Belgravia by Michael Trinick on behalf of The National Trust on 19 March 1981. Initially kept at Lanhydrock House and transferred to Wightwick Manor on 16th January 1998.