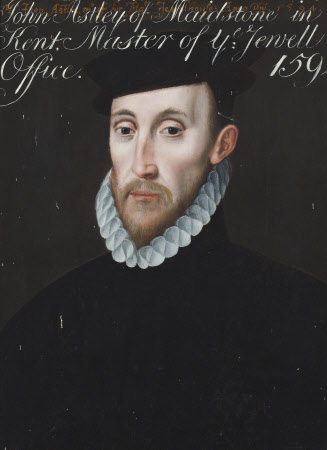 John Astley was made Master of the Jewel Office in 1558. The office carried many financial benefits, including apartments in each of the Royal Palaces. This portrait is inscribed with a date of 1594, but it cannot be right, as the sitter, still with brown beard and hair, and a relatively unlined face, could not be 87 years old. It seems more likely that the portrait was painted to commemorate his appointment to the Royal household. The sitter was not always in favour, spending time in the Tower of London, but he managed to reinstate himself at court. In his later years he spent more time in Kent, and became an authority on horse breeding and riding. In 1584, he published perhaps his most enduring achievement, ‘The Art of Riding’.

The picture must post-date his appointment as Master of the Jewel House in 1558. The inscription dating the picture to 1594 cannot be right, as the sitter, still with brown beard and hair, and relatively unlined face, could not be 87 years old, but he does appear older than in a whole-length dated 1555. Son of Thomas Astley (d. in or after 1514), of Hill Morton and Melton Constable and his second wife, Anne Boughton (d. in or after 1508), sister-in-law of Sir James Boleyn. He married firstly, Katherine Champernowne in 1545 (d.1565), who bore him no issue, and secondly, Margaret Lenton (d. in or after 1596), illegitimate daughter of Lord Thomas Grey, who bore him three sons and three daughters. It seems probable that he first went to court when he was twelve, an introduction almost certainly engineered by his family, given that his mother’s sister was Anne Boleyn’s aunt. In 1543 he was made Gentleman Waiter to Prince Edward, and in the early years of Edward VI’s reign he became a close friend of Princess Elizabeth, and was a leading member of her household. However, Astley is perhaps best-known for his dismissal by the Privy Council from Elizabeth’s service in January 1549, followed by a spell in the Tower of London, for his and his wife’s actions concerning the efforts of the Lord Admiral, Thomas Seymour, Baron Seymour of Sudeley, to marry Elizabeth. He and his wife were soon reinstated, although he may have spent 1553-4 travelling in Italy, but had returned to England in 1555. His wife was dismissed for a second time in 1556. When Elizabeth acceded to the throne, the Astleys were reinstated: Katherine, was created Chief Gentlewoman of the Privy Chamber, and in 1558 Astley became Master of the Jewel House and Treasurer of the Queen’s jewels and plate. The office carried many financial benefits, including a poundage of 5% on all gifts to the crown in coin, the appointment of goldsmiths and jewellers, free victuals, and a suite of apartments in each Palace. However, being held responsible for any unaccounted losses, the post could also lead to financial ruin. In 1561 he entertained the Court at Enfeld during a hunt, and in 1564 when the Queen visited Cambridge, the University gave Astley an honorary degree. He sat for various seats, and also sat on a number of committees and in 1576 was appointed to petition the Queen on the question of her marriage. On the death of his wife, Astley spent more time in Kent, where he became an authority on horse breeding and riding, and in 1584, he published perhaps his most enduring achievement, The Art of Riding. He chose not to make a politically advantageous second marriage, at which point his court career effectively stalled. In 1569 he had exchanged a reversion to the castle and manor of Alington for a £50 annuity he received as Master of the Jewel House, and in 1584 the reversion fell in. He also acquired an estate at Otterden, which he sold in 1588. He had estates in Dorset, Kent and Middlesex. The latter part of his life was spent among the ranks of Elizabeth’s reliable old servants, favoured with office, but not trusted with power. He died on 1st August 1596 and was buried at All Saints Church, near Maidstone Palace, on 5th August. In his will, his widow was to keep the ‘great house’ at Maidstone, and not cut down trees on the estates. He also left 40 nobles to 40 poor people of Maidstone. (Amanda Bradley)