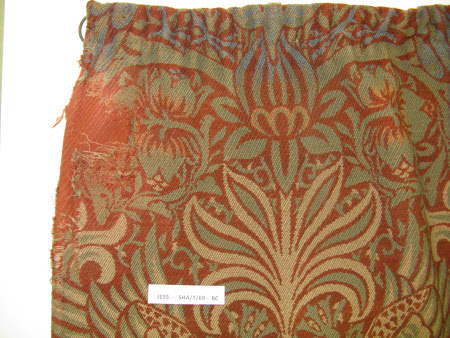 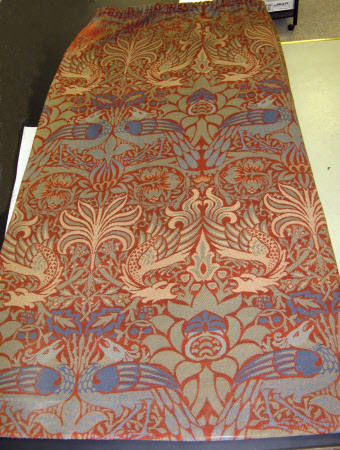 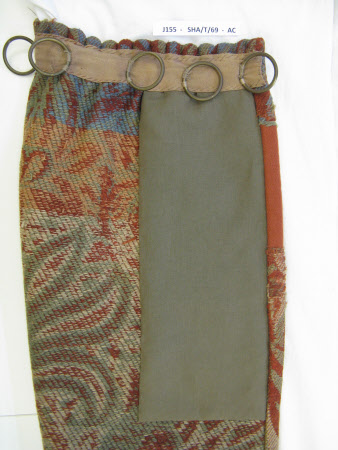 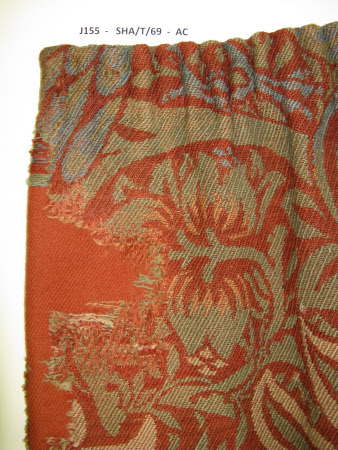 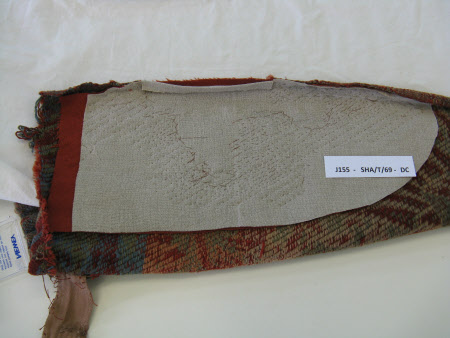 Woven woollen fabric “Peacock and Dragon”, designed by William Morris (1834-1896) in 1878, in the form of a portiere or door curtain. Hand-loom jacquard woven at Merton Abbey by Morris and Company, circa 1900, in shades of red, green and blue, on a red ground. (Linda Parry, William Morris Textiles, p.224, no.36). This pattern of stylized birds and dragons shows the influence of Middle Eastern and Far Eastern textiles, which Morris had studied at the South Kensington Museum (V&A).

The Morris and Company woven woollen textile in the Peacock and Dragon pattern was designed by the socialist, designer, craftsman, and poet William Morris (1834-1896) in 1878. (A second Peacock and Dragon curtain is untraced, but was present in the hall cloakroom according to the Probate Inventory of 1951). The design evoked personal memories for Shaw, having been a guest at Kelmscott Manor, Morris’s country house during the time of his close friendship with May Morris (William Morris's daughter). According to his diaries, Shaw stayed at Kelmscott Manor on a number of occasions where Peacock and Dragon curtains were hung at the windows of the ‘Tapestry Room’. The Morris and Company textiles were particularly important to Shaw, evidenced by the fact that during the period when the Shaws rented Shaw’s Corner as a furnished property (1906 to 1920), they chose to personalize the rooms by hanging Morris curtains at all the windows. The twelve-year friendship Shaw had with Morris was one of the most important in Shaw’s long life. Upon Morris’s death in 1896, Shaw wrote: ‘I feel nothing but elation when I think of Morris. My intercourse with him was so satisfying that I should be the most ungrateful of men if I asked for more. You can lose a man like that by your own death, but not by his.’ Shaw first met Morris at meetings of the revolutionary Social Democratic Federation (SDF) held at Kelmscott House in Hammersmith in 1884, and lectured there in July of that year. Morris had become interested in Shaw after reading his novel An Unsocial Socialist. The Peacock and Dragon curtain is indicative of Shaw’s patronage of Arts & Crafts movement practitioners, and his involvement in the artistic debates of the late 19th and early 20th centuries. The Arts & Crafts movement elevated the status of the decorative arts at the end of the 19th century, encouraging society to place a greater value on how things were made, reacting to the damaging effects of industrialisation. This reform in design and manufacture was led by William Morris and the art critic John Ruskin. Morris was a revolutionary figure who changed the taste and ideologies of late Victorian Britain through his work as designer, craftsman, writer, and socialist. Shaw found Morris’s desire to improve the quality of people’s lives through good design appealing. Shaw became an art critic in 1886, and attended all the Exhibitions staged by The Arts and Crafts Exhibition Society in London. He famously wrote a review of the first Arts and Crafts Exhibition in 1888, praising many of the artefacts he saw there. Shaw often quoted or made reference to Morris in his prefaces and plays: in the preface to Misalliance Shaw uses the quotation “Art is the expression of pleasure in work”; and in his play Major Barbara there is a “William Morris Labour Church”. In Pygmalion Morris furnishings are used to decorate Mrs. Higgins’s drawing room in Shaw’s stage directions: “Mrs Higgins was brought up on Morris and Burne-Jones… In the middle of the room there is a big ottoman; and this, with the carpet, the Morris wallpapers, and the Morris chintz window curtains and brocade covers of the ottoman and its cushions, supply all the ornament.” When Pygmalion was first performed on the London stage in 1914, Shaw created sets with Morris and Company textiles including patterns such as “Honeysuckle”, which the Shaws used in their own domestic interiors. The interiors at Shaw’s Corner are often described as being furnished by Charlotte, however Shaw too was often involved in choosing the objects and furniture. Shaw had a life-long interest in the decorative arts and design, becoming close friends with several important craftsmen and architects. For many years Shaw attended lectures at the Art Workers’ Guild in London, and was in fact elected as an Honorary Brother of the Guild in 1921 for eminent services to the arts. The Art Workers’ Guild, still active today, was founded in 1884 by designers and architects who wanted to create a meeting place for the fine arts and the applied arts on an equal footing. Artefacts and furniture in the house today reflect some of these friendships, and Shaw’s important involvement with Arts and Crafts movement practitioners. The objects include: Morris and Co. textiles, ceramics by Alfred and Louise Powell for Wedgwood, Private Press books featuring typography and printing by Emery Walker and William Morris, book-bindings by Douglas Cockerell, Katharine Adams, and Cedric Chivers, metalwork by John Paul Cooper, and furniture by Ambrose Heal (Shaw’s bed), Walter Cave (Shaw’s piano), and Harry Peach (Shaw’s Dryad chair in the writing hut). (Alice McEwan, 2020)