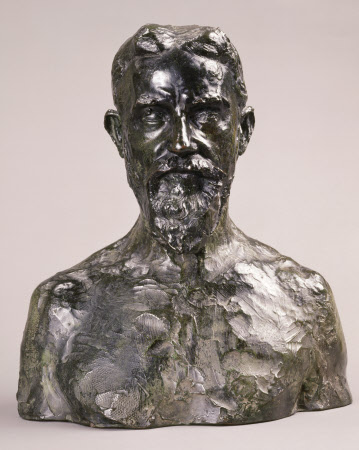 In 1906 the renowned French sculptor Auguste Rodin (1840–1917) was commissioned to make a bust of the playwright, critic and philosopher George Bernard Shaw (1856–1950) by Shaw’s wife Charlotte (1857–1943). Two versions were ordered, one in bronze and one in marble. The bronze bust was transferred to the Shaw house, Shaw’s Corner in Hertfordshire, in 1945, after the property was gifted to the National Trust. Shaw had great respect bordering on veneration for Rodin’s skill as a sculptor, considering him to be a modern-day Michelangelo. After donating his home to the National Trust, he joked that Rodin’s bust would be remembered 1,000 years hence, while its subject would be ‘otherwise unknown’. The bronze sculpture accurately depicts Shaw’s appearance, while also suggesting the vitality of his presence.

Bronze, George Bernard Shaw (1856-1950) by Auguste Rodin (1840-1917), 1906. A head and shoulders portrait bust of Shaw aged 49, showing the playwright with characteristic full beard and hair parted at the centre. He faces forward and is depicted unclothed. Signed reverse, bottom left, A. Rodin.

Purchased by Bernard and Charlotte Shaw from Rodin in 1906; thence among Shaw's possessions at the Shaws’ London residences until 1945 when brought to Shaw’s Corner; bequeathed with house and contents to the National Trust by George Bernard Shaw in 1950, together with Shaw's photographic archive.