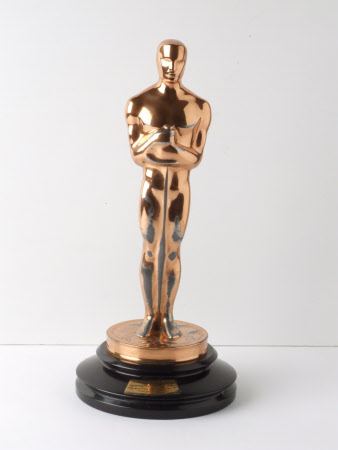 This battered Oscar was won by Shaw in 1938 for his screenplay of 'Pygmalion'. Shaw used it as a door stop, as well as to crack walnuts. 'Pygmalion' was later adapted into the musical 'My Fair Lady', with the majority of the lyrics being taken from Shaw's texts.

Gold-plated Britannium metal (tin/copper alloy) Academy Award of Merit (Oscar statuette) designed Austin Cedric Gibbons (1893-1960) sculpted by George M. Stanley (1903-1977). Statuette of a stylised knight holding a sword, standing on a reel of film with five spokes, on a circular black metal base with a brass plaque. The five spokes each represent the original branches of the Academy: Actors, Writers, Directors, Producers, and Technicians. George Bernard Shaw received his Oscar in 1938 (a year before it was officially called an 'Oscar') for the best screenplay of Pygmalion. He did not collect it in person.

Brass plaque to front of base: ACADEMY FIRST AWARD / TO / GEROGE BERNARD SHAW / FOR WRITING SCREENPLAY OF / "PYGMALION"