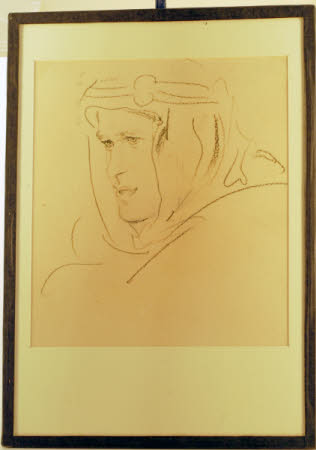 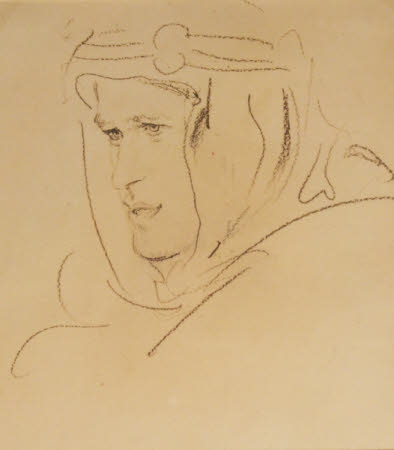 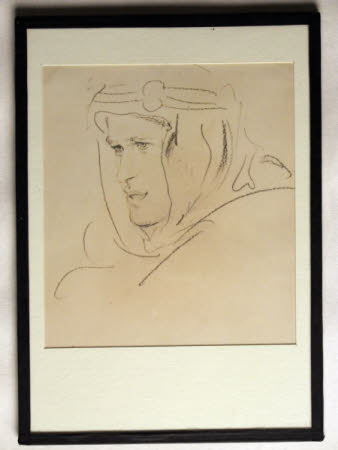 Lithograph of T.E. Lawrence (1888-1935) by Augustus John (1878-1961) after the original drawing of 1919 donated by Bernard Shaw to the National Portrait Gallery, London in 1944. A head-and-shoulders portrait of T.E. Lawrence in Arabic head-dress, three-quarter profile. Bernard and Charlotte Shaw first met T.E. Lawrence (“Lawrence of Arabia”) in 1922 when their friend Sydney Cockerell came to their London flat at Adelphi Terrace to collect the portrait of Shaw by Augustus John which Shaw was donating to the Fitzwilliam Museum, Cambridge. Lawrence became a close friend of the Shaws, especially Charlotte, who corresponded with him a great deal and sent parcels to Lawrence's cottage, Cloudshill (National Trust). Lawrence was a frequent visitor to Shaw’s Corner, and Shaw took a number of photographs of him in the garden. (NT 1715544.22/24). This is a print of Lawrence, after the original pencil drawing by Augustus John which had been owned by Charlotte. Shaw in fact donated two drawings by John of Lawrence to the National Portrait Gallery, both of which had belonged to her, reflecting their close friendship. (NPG 3187, pencil, 1919; NPG 3188, pencil, 1923). The 1919 drawing (from which the present print is taken) was made at John’s flat in Paris, and marked the occasion when Lawrence was attending the Paris Peace Conference. It was reproduced in Seven Pillar’s of Wisdom (1926), Lawrence’s account of the war in the desert. A number of books by Lawrence are in the Shaws’ library, including his Two Arabic Folk Tales (Corvinus Press, with woodcuts by Eric Kennington NT 3062570). Charlotte’s correspondence with Lawrence is now in the British Library (BL Add. Ms. 56495, 56496, 56497. Charlotte Shaw Papers. Typewritten copies of letters from T. E. Lawrence to Charlotte Shaw, together with some from T. E. Lawrence to G. B. Shaw). (Alice McEwan, 2020)