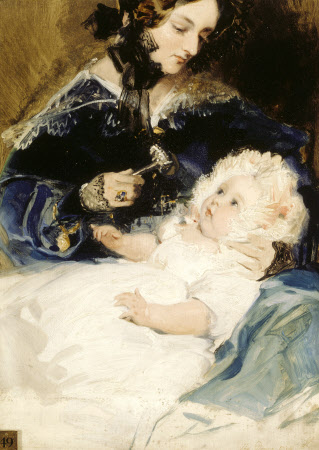 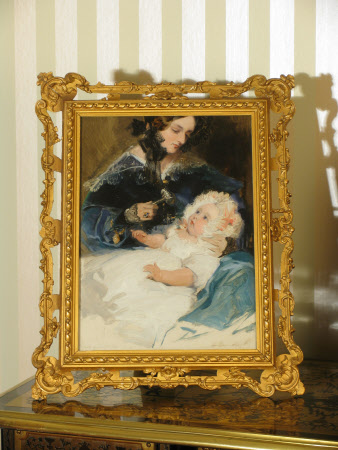 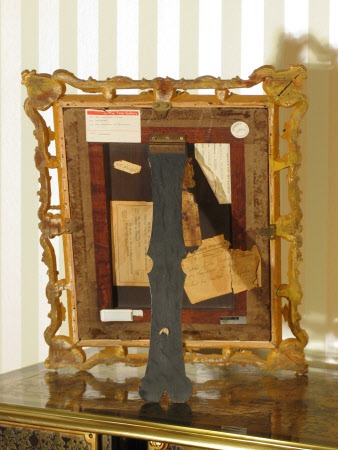 Landseer seems to have snatched up a panel and made this sketch spontaneously, not leaving himself room for the whole of the Marchioness's head. He subsequently began, but never completed, a more elaborate version on copper (Tate). The artist had a uniquely informal relationship with the highest echelons of the Whig aristocracy, but particularly with the 6th Duke of Bedford and his much younger second wife, Georgiana, daughter of the 4th Duke of Gordon. This is just one of a succession of portraits and fancy pictures that he painted of their two youngest daughters.

Oil painting on slate, Lady Louisa Jane Russell, Duchess of Abercorn (1812-1905) with her Daughter, Lady Harriet Georgiana Louisa Hamilton, later Countess of Lichfield (1834-1913) by Sir Edwin Henry Landseer (1802-1873), signed bottom right: The Doune 1834 E.L. Portrait of a young woman, seated with a baby on her knee, holding a rattle in her right hand.

James, 1st Duke of Aberdeen (1811-85); by whom lent to RA in 1874); thence to and by descent from the baby represented, Lady Hamilton, who married Thomas, 2nd Earl of Lichfield in 1855; until Shugbourogh, with its park and contents of the state rooms, was offered in part-payment of death-duties to the Treasury, and transferred to the National Trust, following the death of Thomas, 4th Earl of Lichfield (1883 - 1960)