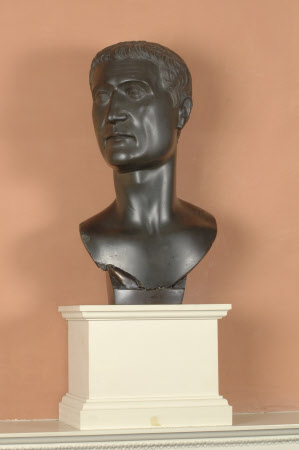 This striking life-sized bust of a commanding male head leaves us with some tantalising questions, but few answers. It was reportedly discovered near Alexandria in Egypt around 1780, and from the style we know that the sculptor was Greek or trained by a Greek artist in the centuries when Egypt was ruled by Rome. Opinion is divided about who it represents, but some think it depicts Mark Antony (83–30 BC), a Roman general in charge of Rome’s eastern provinces, including Egypt. Whoever the subject, it depicts a man of considerable importance and status, as the beautiful shiny black stone (known as basanite) was a rare material used only for individuals of the highest rank. His extremely long neck, square jaw and arched brows appear idealised, designed to flatter an important sitter. The sculpture came to Britain when it was acquired by the British representative to Egypt George Baldwin (1744–1826) and was later bought by the Egyptologist William John Bankes (1786–1855) for his impressive collection, which is still on display at Kingston Lacy, Dorset.

This portrait of a man with a commanding countenance and fine aquiline nose was reportedly discovered at Canopus near the Egyptian city of Alexandria in around 1780. It was acquired by George Baldwin (1744-1826), the British consul and arabist who established major trade links in Suez for the East India Company. Baldwin's collection was sold at Christie’s in 1828 and the bust was purchased for Kingston Lacy by William John Bankes (1786-1855). Rendered in the idealising Hellenistic style, the head was made by Greek or Greek-trained sculptors working in Alexandria using traditional Egyptian materials. Basanite was a highly prized stone reserved only for the most important subjects. It was mined on a relatively small scale and with great difficulty at the Wadi Hammamat, a mountain in the Eastern Desert on the Red Sea trade route. Given the value of basanite, this life-size head, which may have been part of a herm or niche sculpture, depicts a man of status and authority, probably an official, although the exact identity of the sitter is unclear. Baldwin believed that the bust depicted the Emperor Augustus (63 BC-AD 14), 'Conqueror of Egypt' (Baldwin's Museum): an identification accepted by the Society of Dilettanti in their publication Specimens of Antient Sculpture (vol.II). Owing to the shape of the nose and lips, it was later re-identified as a portrait of Augustus’ great adversary, Mark Antony (83–30 BC). This re-identification, itself now questioned, was based on likenesses in coins and cameos, however surviving sculptural images of Antony share few similarities with the sitter depicted here. William John Bankes made two pioneering expeditions to Egypt in 1815 and 1818-19. His records of Philae, Nubia, Abydos and Abu Simbel remain important sources for Egyptologists today, and his transcriptions of the Philae Obelisk, which he installed on the lawn of Kingston Lacy, contributed to the decipherment of Egyptian hieroglyphics.

Acquired by George Baldwin in Egypt c. 1780; sold Christie’s, London, 8-9 May 1828 and purchased by William Bankes, thence by descent; bequeathed by (Henry John) Ralph Bankes (1902–1981) to the National Trust, together with the estates of Corfe Castle and Kingston Lacy and its entire contents.