The Separation of Night from Day 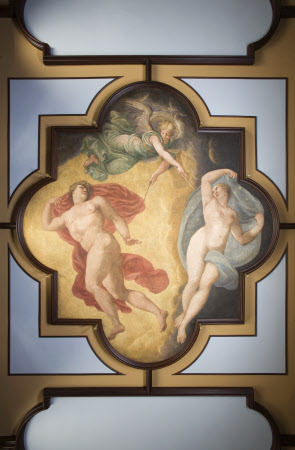 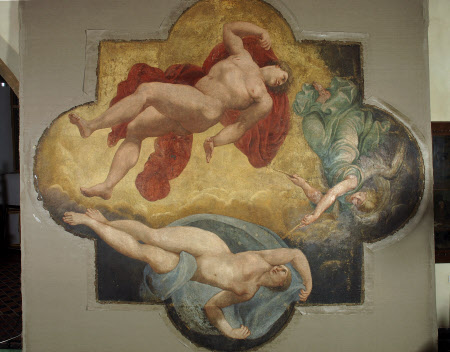 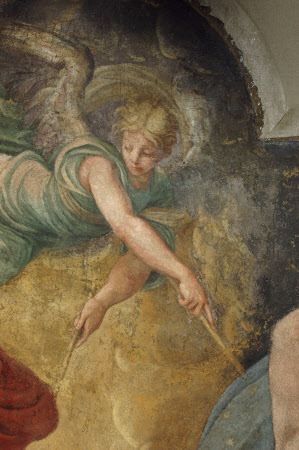 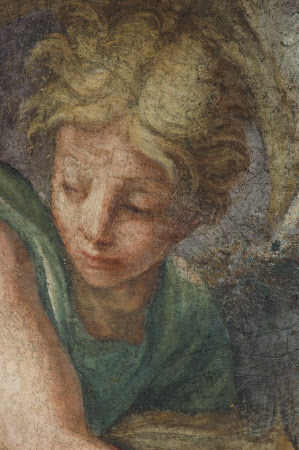 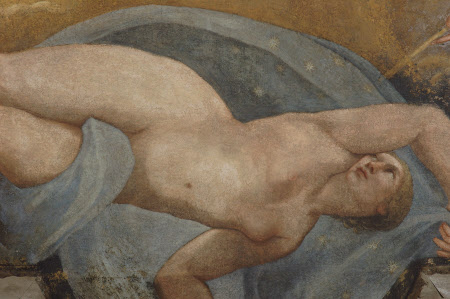 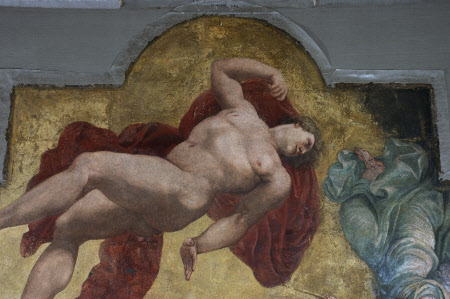 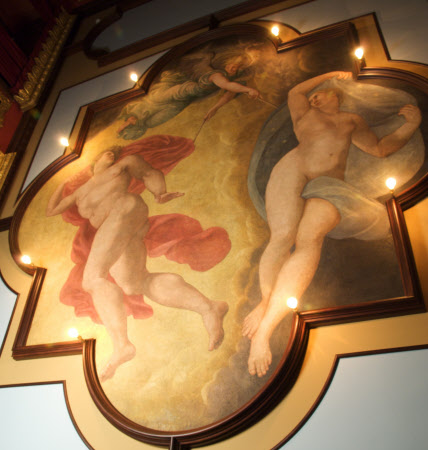 The separation of night from day happens in the biblical story of the Creation. A figure, a winged celestial being or spirit, who has variously been called Dawn or Twilight, separates two figures with two wands. Day, a scantily clad young man moves swiftly towards the light, holding aloft a flaming red cloak looking back over his shoulder in the direction of Night from whom he has just withdrawn. Night, in turn, partially enveloped in clouds, raises her star-studded mantle as if to cover her nakedness and gazes in the direction of retreating Day. This was a painted fresco in oils, one of very few by Reni in that medium, and one of his earliest works. It was originally on a curved ceiling in the Palazzo Zani, in Bologna, but was taken down, using a novel technique, strappo (detaching the paint-infused plaster from the plaster behind, and reapplying it to canvas) and bought by William John Bankes (1786–1855) in 1840. It was restored and installed in the Library at Kingston Lacy in 2006 whereas the Fall of Phaethon is still in the palace.

Fresco transferred to canvas, The Separation of Night from Day, by Guido Reni (Bologna 1575 – Bologna 1642), 1598-99/1600. Above a female winged figure dressed in green holds a pair of golden dividers and crossing them across two figures.The male figure on the left with swirling red drapery and against a sunny golden background represents Day whilst the female figure beginning to cover herself with swirling transparent drapery studded with stars, against a dark background, on the right, depicts Night. This detached fresco is one of the earliest works by Reni, and one of very few by him in that medium. It was originally on a curved ceiling in the main saloon in Palazzo Zani, 56 via Santo Stefano, in Bologna, but was taken down, using a novel technique, strappo (detaching the paint-infused plaster from the plaster behind, and reapplying it to canvas). Restored by Bush and Berry and re-installed in the Library in 2006.