Landscape with Alexander and Diogenes 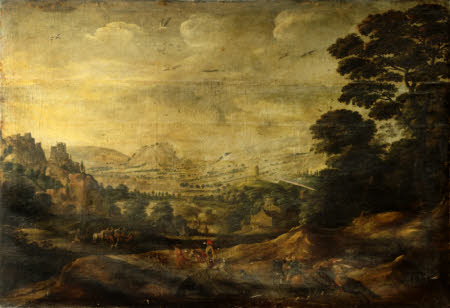 Oil painting on canvas, Landscape with Alexander and Diogenes, Netherlandish School, early 17th century. A panoramic mountainous landscape with castle on far left in middle distance. Tall trees in foreground on the right and a man on horseback in foreground centre. Other groups of figures and horses are clustered in the landscape behind on the left. The scene depicted is related in Plutarch (33:14) when Alexander the Great has dismounted from his horse, Bucephalus, and stands before the cynic Greek philospher Diogenes and his tub asking him to request any favour. Diogenes, who despised wordly possessions, simply asks him to step aside as he is shading him from the sun.

first recorded in 1731; in Henry Bankes the Elder, A Catalogue of the Pictures at Kingston Hall, October 1762 as: A large Landscape, with Alexander the Great and Diogenes / and with other Figures; bequeathed by (Henry John) Ralph Bankes (1902 – 1981) to the National Trust, together with the estates of Corfe Castle and Kingston Lacy and its entire contents