Apollo crowning a Poet and joining him with a Consort, witnessed by Hercules and by four other Females 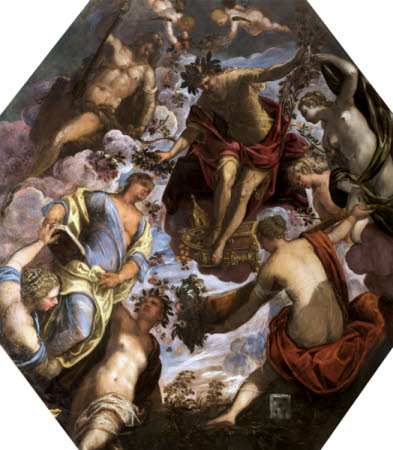 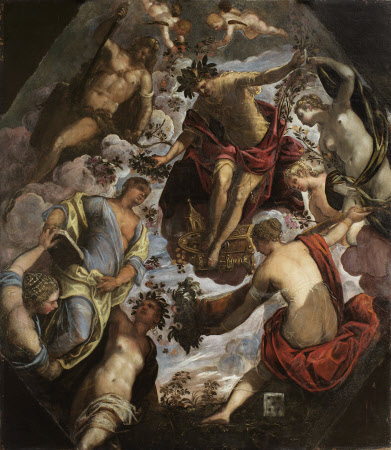 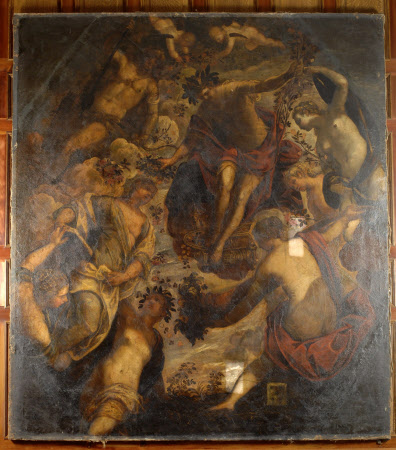 The subject of this picture has not been satisfactorily deciphered, despite its recent cleaning in 2010. A figure with a book, or possibly a tablet, borne upwards by two other figures, one of whom props open the book, is being crowned by Apollo, at whose feet are a gold chalice, a gold dish with coins on it, an open gold box, and a golden steeple. Hercules, wearing his lion skin and holding a spear and bow, looms in the clouds overhead. Three of the females could be the Three Graces and the lowest female sitting, with a die below her, with the five-spots-side showing to the front and three to the left - the Graces' attribute, as the handmaidens of Venus, who played games of chance. Or, more likely, she is Fortune, mistress of the sea, with a cornucopia, whose attribute is also a die. When William Bankes (1786–1855) acquired this picture from the Pasquali sisters, through Alvise (Ulisse) Mazzuoli, in Venice in 1850 he thought that it showed Apollo and the Muses, and intended it as the centrepiece of a Venetian-style ceiling over the Library at Kingston Lacy.

Oil painting on canvas, Apollo crowning a Poet and giving him a Consort, witnessed by Hercules and by four other Females by Jacopo Tintoretto (Venice 1519 - Venice 1594), 1570s. Apollo (or possibly Hymen), crowned with laurel, in the centre, on a cloth-covered seat in the sky, and with his feet on a gold chalice, a gold dish with coins on it, an open gold box, and a golden steeple, bends down and placing, with his right hand, a leafy crown over an androgynous figure, in loose blue and yellow drapery, holding a book (?or a stone tablet) against his thigh in his right hand, lower left. This figure is supported by two women: one – who helps prop up the book - draped, and with hair done up in a pearl-adorned net; the other, almost naked, with leaves in her hair. In his left hand Apollo (or Hymen) holds strands of an orange-flowered plant (?myrtle) over a virtually naked white-fleshed - but shadowed and very loosely-draped - young woman, who is holding a strand of the same plant in her right hand on the upper right. She is accompanied by another young woman. Below them, bottom right, sits Fortune, holding a cornucopia, over a die showing the face with five dots and three dots to the left. Above all these, in the sky, top left, Hercules, holding a spear in his right hand and a bow in the other (rather than his usual attribute of a club), looks down on them, and, at the very top, two cupids scatter roses. According to myth, Hercules was deified after his death and became one of the twelve gods on Mount Olympus. He married Hebe, the goddess of youth, who was the daughter of Jupiter and Juno and also the cup-bearer and a handmaiden to the gods. Another reading of the subject of the scene is that this is the marriage of Mercury (god of financial gain, commerce, eloquence) and mortal Philology (learning; love of reason) from the antique source of Martianus Capella’s 5th-century allegory, 'De nuptiis Philologiae et Mercurii', an edition of which was published in Vicenza in 1499. According to the biographer of Venetian artists, Carlo Ridolfi in 1648 an 'Apollo and the Muses' that this paintng was once entitled (erroneously) had two other paintings of 'Jove and Semele' and 'Venus and Adonis' at its sides when they hung in the Palazzo Pesaro at San Staë.

Acquired by William John Bankes from the Pasquali sisters, through Alvise (Ulisse) Mazzuoli, in Venice in 1850 as 'Apollo & the Muses Tintoretto from the Grimani Palace, Venice' (Receipt, dated 26th March 1850, amongst the Bankes papers in the Dorset Record Office) and intended by him as the centrepiece of a new and raised Library ceiling, flanked by the two ‘Bonifazios' (now attributed to Palma Giovane), but he was dissuaded from this by his widowed sister, Anne Frances Bankes, Lady Falmouth, who slept in the bedroom above (see also his letter to her of 5 May 1854); bequeathed by Ralph Bankes, 1981.