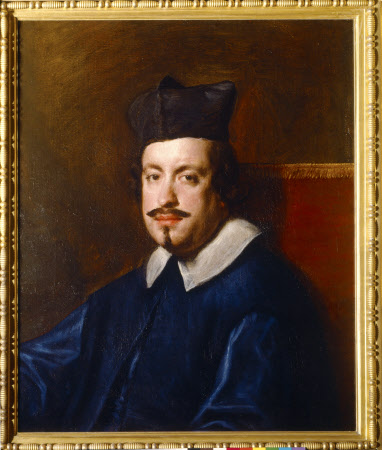 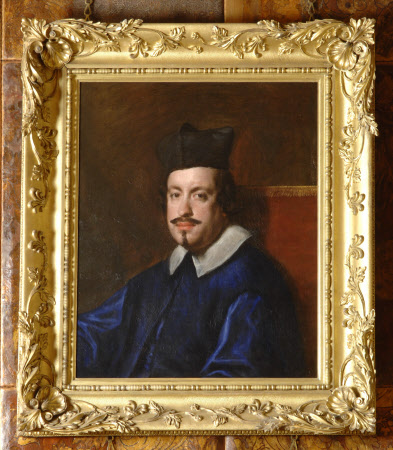 Camillo Massimi (1620-1677) is wearing the peacock blue vestments of the private chamberlain to the Pope which Innocent X (1572-1655) had appointed him in 1646. Massimi, who was a member of the one of the most distinguished Roman families, was painted in the fairly rare ultramarine pigment by the Spanish artist Velázquez, on his second visit to Italy, between 1649-50. He was later indebted to the artist when he was initially refused to court by Philip IV whilst he was nuncio (papal ambassador) in Spain. He was later created Cardinal though with the accession of another Pope, Clement X, in 1670. Throughout his life he was a dedicated humanist, producing a new edition of Virgil, as well as being a great patron and collector of medals, antiquities and paintings, particularly by the French artists, Poussin and Claude, and more by Velázquez of the Spanish Royal family. After his death this portrait was known to have been owned by the Spanish Ambassador in Rome, Don Gaspar de Haro, Marquis del Carpio and de Heliche (1629 - 1687), another renowned collector, notably of the Rokeby Venus. This was confirmed when his collector’s mark and coronet were revealed by a recent examination of the original canvas underneath a relining. It was subsequently owned by Count Ferdinando Marescalchi (1754 - 1816) in Bologna from whose collection it was acquired - along with The Judgement of Solomon and Titian’s Nicolò Zen (1515-1565) - by William Bankes for Kingston Lacy in 1820 even though the sitter's identity had been forgotten and he was called just an 'Ecclesiastic'.

Oil painting on canvas, Cardinal Camillo Massimi (1620-1677) by Diego Velázquez (Seville 1599 - Madrid 1660),1649-50. Inscribed by brush in ink on the reverse of the original canvas: Coronet / DGH. (entwined) / 430 [DGH = D[on] G[aspar de] H[aro]]. A bust-length portrait of the great patron, collector and friend of Poussin. He is turned slightly to left, facing the spectator, seated in a red chair with gold fringed braid at top. He has large heavily-lidded dark eyes and thick red lips beneath a slim horizontal dark brown moustache and a vertical strip beard. He is wearing a black/grey biretta and shows a soft white linen collar falling over the silk sottana and serge soprana, in peacock blue - of a cameriere segreto or d’onore. He is painted in the habit as a cameriere segreto (private chamberlain) of Pope Innocent X (who had appointed him this in 1646) of peacock blue, and painted during the artist's second visit to Italy in 1649-50.

Painted in 1649-50 in Rome for the sitter and in his possession until his death (in the inventory of his collection as showing the sitter “in the robes of prelate”); acquired by the Spanish Ambassador in Rome, Don Gaspar de Haro, Marquis del Carpio and de Heliche (1629 - 1687) and his possession until his death in Naples; [...]; acquired by William John Bankes from the Marescalchi Collection in Bologna, 1819/20; bequeathed by Ralph Bankes, 1981