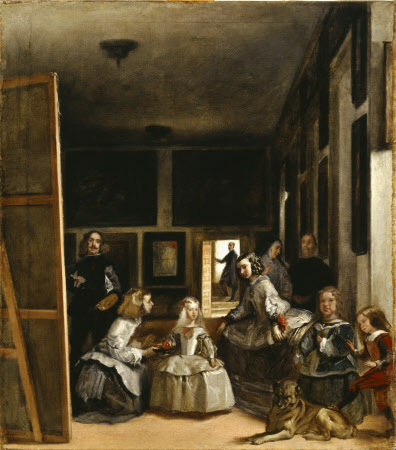 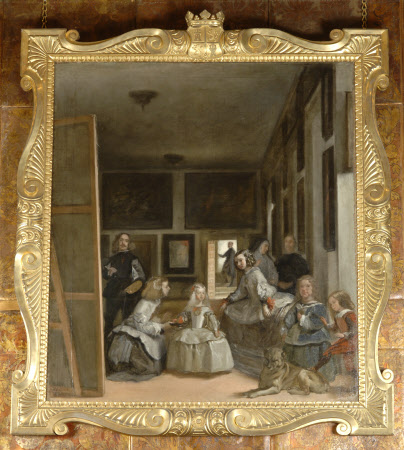 Oil painting on canvas, 'Las meninas' (The Handmaidens of the Infanta Margarita in the Household of Philip IV) (after Velázquez) by Juan Bautista Martinez del Mazo (Beteta province of Cuenca c.1612 – Madrid 1667), between 1656, date of the original, and 1667 when Mazo died. Left to right, portraits of: Velázquez, full-length, facing, a palette in his left hand; Doña Maria Augustina Sarmiento, full-length, kneeling, dressed in silver and black and offering the Infanta a drink in a red cup; Infanta Margarita, full-length, turned slightly to left, head, turned slightly to right, facing, wearing a silver dress, long blonde shoulder-length hair; Don José Nieto Velázquez, aposentador, or Palace Marshall, Master of the Queen's Tapestry, full-length, standing on some steps in an open doorway at back of room; Doña Isabel de Velasco, full-length, dressed in grey and silver with red ribbons at her wrist; Doña Marcela de Ulloa, guardamujer de las damas de la Reina, full-length, turning to talk to and unknown attendant full-length, facing; Maribárbola, a dwarf, full-length, dressed in dark blue with silver trimmings; Nicola de Portosanto/Pertusarto, dwarf, full-length, dressed in dark red, shoulder-length hair with his left foot on a mastiff which is lying on the ground, right, facing centre of canvas. It takes its name from the handmaidens of the Infanta Margarita (1651-73), daughter of Philip IV of Spain and Mariana of Austria. The original is now in the Prado, Madrid.

In the private apartments of Royal Palace, Madrid (Jardin de San Joachim, inventory 15 June 1677, no. 314 and posthumous inventory of 1688 as no. 364, valued at 4,000 reales) with Don Gaspar de Haro, 7th Marqués del Carpio (1629 - 1687); taken in lieu of debts by his cousin, the Conde de Monterrey in 1690; acquired by the medallist Pedro de Sepúlveda (1744-1815), from an undisclosed source, for 2,500 reales, for Pedro Diaz de Valdes and (?Bernardo del) Campo to present to Gaspar Melchor de Jovellanos (1744-1811), at the instigation of Ceán Bermúdez, in February 1790 [the number 276 inscribed on reverse of unlined canvas, may have been that given to the picture in Jovellanos's collection); bought from the heirs of Gaspar Melchor de Jovellanos by William John Bankes (1786-1855) by October 1814; sent to Kingston Lacy via Sir Henry Wellesley (1773 - 1847) (brother of the Duke of Wellington and then Ambassador to Spain); thence by descent until bequeathed to the National Trust, with the estates and contents of Kingston Lacy and Corfe Castle by Ralph Bankes (1902-1981)