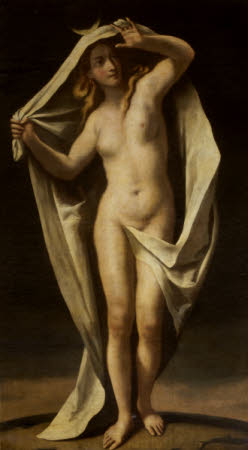 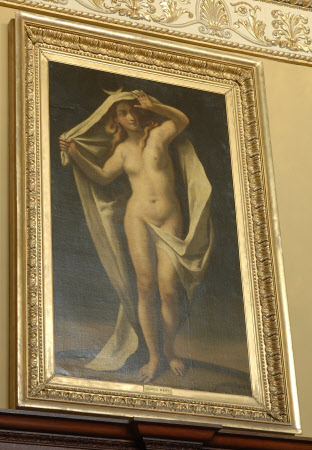 Selene stands, full-length and nude, pulling drapery around her. She is the Greek goddess of the moon, or Luna, a predecessor of Diana, the Roman virgin huntress goddess. She is shown with a crescent moon resting on her head but conversely, was not renowned for her chastity. The style of the type of the subject seems to come from a Lucretia attributed to Titian in the Royal Collection, or from some common original. Petro della Vecchia, whose real name was Pietro Muttoni, acquired his sobriquet from his imitation of the old (vecchia). Therefore it implies he was regarded a copyist of old paintings of the previous century.

Oil painting on canvas, Selene, by Pietro della Vecchia Venice or Vicenza 1603 - Venice 1678), early 17th century. A full-length nude female figure, half-draped, with a crescent moon resting upon her head. Selene was the Greek goddess of the moon whom the Roman virgin huntress goddess Diana was later associated with. She is shown with a crescent moon over her head but conversely, was not renowned for her chastity.