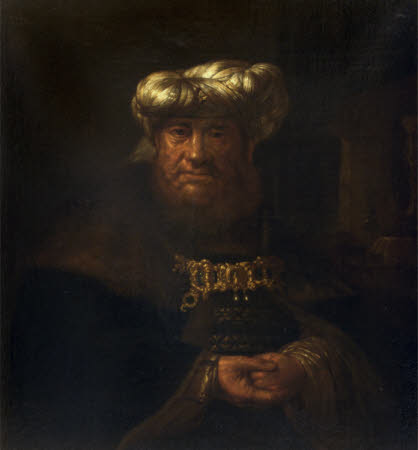 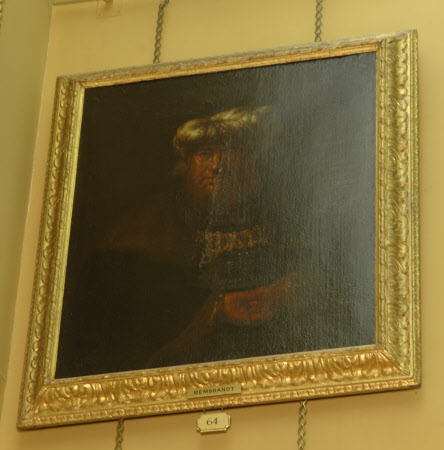 The flecks on the old man's face, who has traditionally been called a rabbi or oriental, are not just discolourations of the paint, but are thought to represent leprosy. Therefore, it has been suggested he is King Uzziah, King of Judah from 787 to 736 BC, who, according to the biblical story in Chronicles 26: 16-20, was stricken with the disease after burning incense in the temple of Jerusalem, a privilege for priests only. Or Naaman, the commander of the army of the King of Damascus, a leper who was cured after bathing seven times in the River Jordan, after the advice of Elisha, a disciple of the prophet Eliijah, known to perform miracles, according to the biblical story, told in the Book of Kings. However, Cardinal Mazarin, said to be the most powerful man in France when he died in 1661, owned the original painting by Rembrandt of around 1639, now in the Devonshire collection at Chatsworth. Then, it was called, ‘the portrait of a Pasha’, a Turk.

Oil painting on canvas, Possibly King Uzziah Stricken with Leprosy, after Rembrandt van Rijn (Leyden 1606 – Amsterdam 1669). The flecks on the man's face are not just discolourations of the paint, but are thought to represent leprosy; it might therefore also represent the opulent Naaman, whom Elisha healed of his leprosy. The original of around 1639, on panel, is at Chatsworth.

In the collection of Cardinal Mazarin's sister, Laura Margherita Mazzarini (1608 -1685), in Rome, before being acquired by (Sir) Ralph Bankes, in 1659 as: 'A Coppy of A Turks head from Rainebrand. The orriginall is Cardinall Mazerins...Pnd 20'; bequeathed by Ralph Bankes, 1981