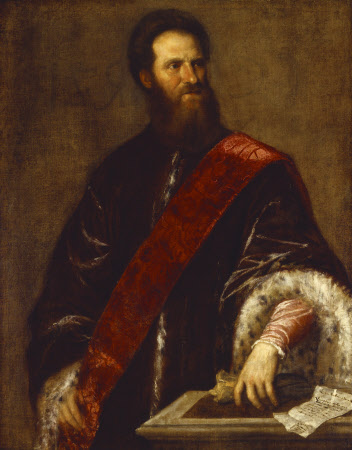 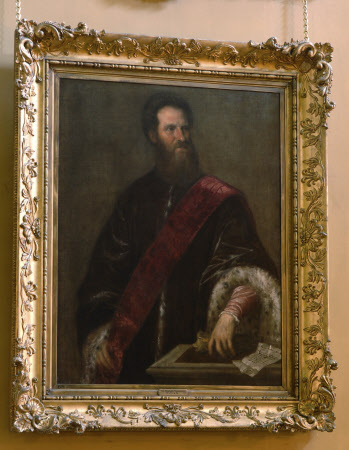 Oil painting on canvas, Nicolò Zen (1515-1565) by Titian (Pieve di Cadore 1488/90 - Venice 1576), 1560-65, inscribed on the back of the canvas: CA ZORZI. Bought by William Bankes in Bologna from Marescalchi collection as an unknown senator of the Savorgnan family, its previous owners but the recent discovery of an early copy of the head, inscribed Nicolò Zen, now in the Museum of Bassano del Grappa, has made it possible to identify this as the lost portrait of ' M. Niccolò Zono', mentioned by Vasari in 1567 as among Titian's later portraits.

Painted for Nicolò Zen; his son, Caterino Zen (1544–1532) who died with no male issue; passes directly to his grandson, Costantino Zorzi (1584–1642), son of Lucrezia Zorzi; thence to his daughter, Gabriella Zorzi (m. Taddeo Morosini); thence to their son, Girolamo Morosini (1648–1690); thence to his daughter Lucrezia, who marries Francesco Savorgnan (b.1667); their son, Giancarlo (1695–1732); his son, Conte Marchese Antonio Savorgnan del Torre (1744–1810); thence to his niece, Maria Savorgnan, daughter of Girolamo, and who married Antonius Mor (a jeweller); sold to the lawyer, Galeazzi, who in turn sold it to Ferdinando Marescalchi (1754–1816) in 1812 (Palazzo Marescalchi, Bologna); bought by William Bankes in 1820 from the Marescalchi executors (see his note in the DRO: “The Elder Schiavone [probably Natale Schiavone (1777–1858)] (whom I consider the best colourist now in Venice) tells me that he made, and still has somewhere in his possession, a small sketch or copy of the Marquis of Savorgnan by Titian which is now at Kingston Lacy. It was at the time he copied it in the choice collection of the Avvocato Galeazzi, who sold it with three other pictures (of which one was the Judgement of Solomon by Giorgione, he cannot call to mind the remaining time) to the Conte Marescalchi for 10,000 Francs.”Bought by William John Bankes (1786 - 1855) in Bologna in 1820, from the Marescalchi collection, as an unknown senator of the Savorgnan family, its previous owners.

CA ZORCI (on the back of the canvas, how)