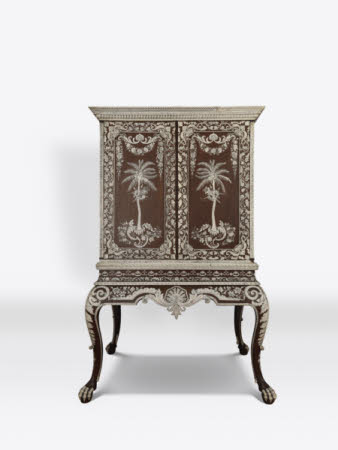 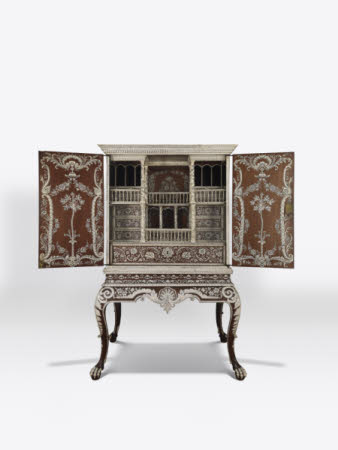 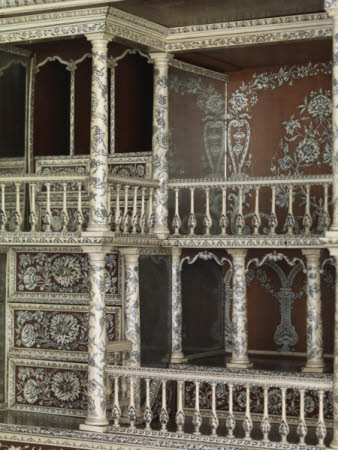 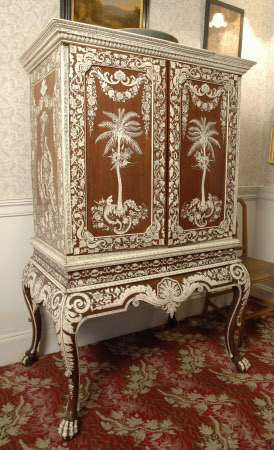 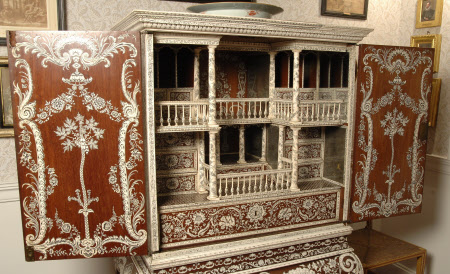 Patterns of flowers and trees from Indian textiles have been combined with designs from 18th-century Anglo-Dutch furniture to create this striking cabinet. Probably made for Western merchants or officials working in India, it is made from rosewood or padouk and is inlaid with engraved ivory decoration. In the late 1700s the Indian port of Vizagapatam (today called Visakhapatnam, the largest city in the district of Andhra Pradesh) became a well-known centre for the production of Anglo-Indian furniture and textiles for a Western market. In this example the very high quality of the craftsmanship is evident in the interior, which is designed to impress as the doors are opened. The interior is laid out as galleried rooms with ivory columns and balustrades, and the ‘walls’ are fitted with drawers. It is possible that the cabinet came to Kingston Lacy in Dorset as a gift for a former owner, George Bankes (1787–1856), who had been Commissioner of the India Board and also sat on the board of the East India Company. Such examples of inventive cross- cultural design and manufacture were celebrated and promoted at the 1851 Great Exhibition in Hyde Park, London.

An ivory-inlaid and ivory-mounted rosewood (or padouk) cabinet on stand, Vizagapatam (Visakhapatnam), mid-18th century. The cabinet topped by a moulded and carved cornice and fitted to the interior with an architectural arrangement of shelves, columns and balustrades, all profusely inlaid with flora and scrolls. The doors and the sides with a timber ground inlaid with palms hung with bows and arrows, and floral swags within a border of meandering leaves and scrolls. The stand with a recessed frieze and boldly convex and shaped aprons, inlaid with shells, rocaille scrolls and leaves. The paw-carved feet also inlaid with ivory.

This extraordinary cabinet on stand is one of the finest examples of Visakhapatnam furniture in any English collection. How it came to be at Kingston Lacy is unclear: it may have been purchased around the time it was made or it may have been acquired in the 19th century, when there was a thriving secondary market in this type of furniture in England. Visakhapatnam is on the south-eastern coast of India. Since the 17th century it served as a major port and, as a centre for the manufacture of dyed cottons, attracted European traders. The Dutch established a trading port at Bimilpatam to the north in 1628 and the English founded a textile factory in Visakhapatnam itself in 1668. Amin Jaffer notes that ‘Vizagapatam possessed the ingredients necessary for the success of a centre of furniture-making', its fine harbour providing access to many fine timbers including teak, ebony and rosewood which were indigenous to the surrounding Northern Circars region. Other materials, such as ivory from Pegu, padouk and sandalwood were also readily available to the local craftsmen. From as early as the second half of the 17th century, the ivory-inlaid furniture which was the specialism of Visakhapatnam craftspeople was attracting European interest and a market in furniture made in Dutch and English forms, specifically for Dutch and English buyers, emerged. As time went on, we know that Indian cabinet-makers were modelling their furniture either on English prototypes or were perhaps referring to printed sources and pattern books. Thus, a set of seat furniture owned by Alexander Wynch, Governor of Fort St. George from 1773-1775, may have been modelled on Thomas Chippendale’s Gentleman & Cabinet-Maker’s Director first published in 1754. In this way, the influence of European traders, and the encroachment of early European colonialism, affected the local material culture. Furniture of this type, however, is a bicultural amalgam: the forms are European, but the decoration and the inlaying techniques are purely Indian in character, incorporating flora from the Coromandel Coast. Early Visakhapatnam furniture was made by inlaying pieces of ivory, with ornamental engraving enhanced by black lacquer, into beautiful and rich Indian timbers. Towards the end of the 18th century items of furniture were more commonly totally veneered with sheets of engraved ivory, the engraving sometimes incorporating architectural views. This cabinet on stand was made during the period of that transition and is of exceptional quality. It is thought to have come from the same workshop as a pair of chairs (sold Christie’s, 4 July 2019, Lot 119) which were reputedly the gift of the Nawab of Arcot, Muhammad Ali Khan Wallajah (1717-1795) to a British East India company official. Whilst some furniture was known to be legitimately purchased by Europeans in Visakhapatnam, it is also a legacy of the ‘gift’-giving which brokered European colonial encroachment.

Bequest of the estates of Corfe Castle and Kingston Lacy made to the National Trust by Henry John Ralph Bankes (1902-1981). National Trust ownership commenced from 19th August 1982.