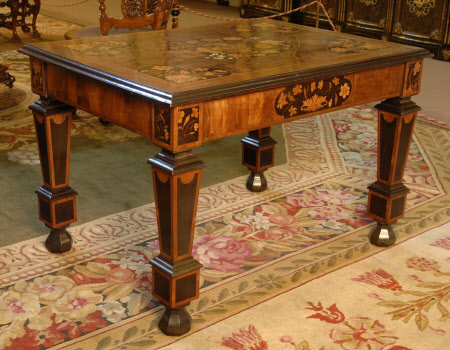 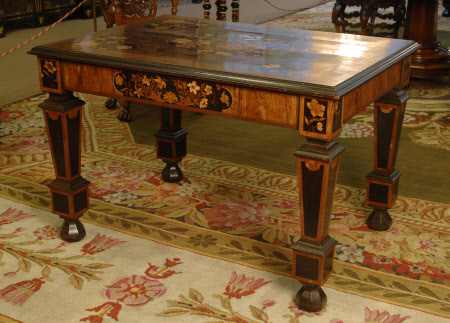 A pair of walnut and olive, marquetry inlaid centre tables, probably constructed circa 1840, the marquetry tops converted from a pair of cupboard doors, in the manner of Jan van Mekeren (Amsterdam, 1658–1733) circa 1700. Each top inlaid with a central oval panel of a vase of flowers standing on a plinth with bone inlaid detail and with corner panels inlaid with further floral designs, above a frieze incorporating a single drawer and further later floral inlay (circa 1840). Raised on square section tapered legs with block collars and turned bun feet.

These table tops would have originally been part of a cabinet on stand, they are typical of Dutch floral marquetry of the late 17th century.The quality of floral marquetry produced at this time in Amsterdam rivaled all but the finest work produced in Paris. It attempted to imitate flower paintings, which were popular and van Mekeren was a master of his craft. There are several pieces attributed to his workshop, one such cupboard is in the V&A collection (W.5:1 to 3-1986) and others in the Rijksmuseum, Amsterdamn (BK-1964-12) and (BK-1962-50). James Weedon (July 2018)