The Life of the Virgin: The Circumcision of Christ 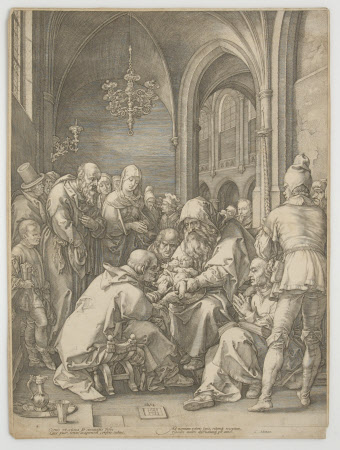 Described in the biblical gospel of Luke (2:21) and in accordance with the Jewish law of Moses, the infant was taken to the Temple in Jerusalem to be circumcised and named Jesus (saviour) when he was eight days old (now on January 1).The event was significant as it was the first time that Christ shed blood (beginning of the redemption of man). Goltzius shows a naked child submitting to the operation in a side chapel in the church of St Bavo, Haarlem, his native town. He is held by the seated High Priest whilst another on a lower stool and wearing spectacles prepares. Joseph and Mary stand amid other onlookers on the left. This is the fourth print in a series of six engravings of the Life of the Virgin, executed in 1594. The scene adapts the woodcut of the same subject by Albrecht Dürer of 1503/5. The artist has included a portrait of himself, seen behind the priest looking out at the viewer.

Print, engraving, The Life of the Virgin: The Circumcision of Christ by Hendrik Goltzius (Mulbrecht 1558 – Haarlem 1617), 1594. With a Latin verse by Cornelis Schonaeus (1541-1611) set in two columns at the bottom:Cernis ut octava sit circuncisus Iesus / Luce puer, tenero accipiens in corpore vulnus, / Ad normam veteris legis, ritumque receptum, / Isacidis multos observatumque per annos. [You see how Jesus is circumcised on the eighth day and in his tender little body receives a wound according to the rules of the ancient law and the custom that has been observed for many years]. Goltzius peers out from between the columns at the back. Set in the interior of the groin-vaulted chapel of the Brewers’ Guild of St Bavo's Church, Haarlem.

Hendrik Goltzius (Mulbrecht 1558 – Haarlem 1617)., engraver and artist of the original