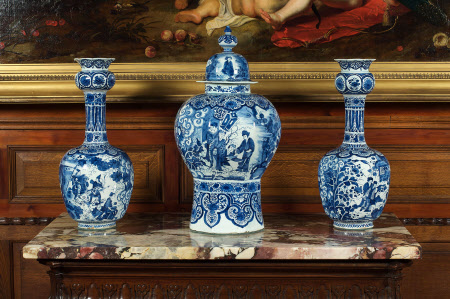 Garniture set of two vases and one larger covered vase. Large garniture of three Delft blue-and-white octagonal baluster vases, painted with figures in the Chinese Transitional style. Panels of warriors and figures in rocky wooded landscapes, with a deity among clouds, within elaborate ruyi-lappet and quatrefoil panels of scrolling foliage.

The garniture matches an entry in the meticulous account book kept by Margaret Bankes, née Parker (d.1730), who in 1691 married the MP John Bankes (1665–1714), on 26 September 1698, ‘Payd for a large delph jar & 2 bottles £3.00.00’, a fashionable luxury they could ill afford.* A few years earlier, in February 1691, Mrs. Bankes noted in her ledgers, ‘Payd for a japan cabinet, 43.0.0’, followed by ‘Payd for china to set on the cabinet 20.0.0’, possibly acquiring them on the same day or from the same merchant, perhaps purhasing the entire shop display. The Delft faïence appears cheap in comparison, and her choice of ‘Dutch Ware’ was an indication of economy, availability or taste: there are several Dutch fan-shaped flower holders, c.1695, still in the collection. The garniture sits above a contemporary Dutch burr walnut cabinet-on-stand with so-called “seaweed-marquetry”, inscribed with the names of Jan Roohals and I. Hoogeboom, unrecorded journeyman.**With the death of Queen Mary II in 1694, however, the English market for high-end Delft faïence quickly abated. Their continuous landscapes are in-painted in cobalt blue with three vignettes: hunters on foot and horseback, scholars in conversation and a rare depiction of the Buddha Maitreya in an imagined heaven, surrounded by monks. While the first two scenes appear elsewhere on Chinese porcelain or lacquer ware, c.1675–95, the last scene derives from an engraving by Jacob van Meurs (c.1619–80) in Olfert Dapper (c.1635–89), Beschryving Des Keizerryks Van Taising Of Sina [Descripton of the Empire of Taising of China], Amsterdam, 1670, plate No. 4, an account of two Dutch East India Company missions in the 1660s. The Buddhist devotional images were presumably direct copies of Chinese woodblock prints acquired in the Netherlands, and had appeared earlier on Delft faïence. * Dorset History Centre, Dorchester, Dorset, Bankes D/BKL 8C/55 ** NT 1254596 Text from Patricia Ferguson, Ceramics: 400 Years of British Collecting in 100 Masterpieces (2016)