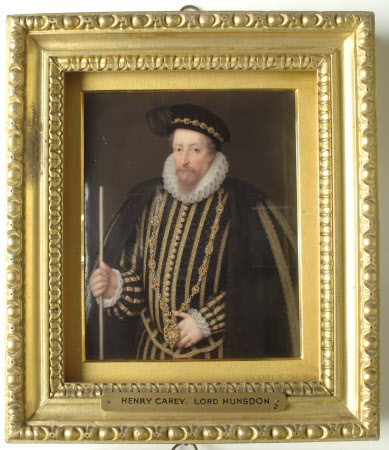 Enamel portrait miniature. Henry Carey, Lord Hunsdon (?1524-1596) (after British (English) School) by Henry Bone, RA (Truro 1755 – Somers Town, London 1834).1800. Half-length portrait, turned slightly to left, head facing spectator, with moustache and beard, wearing a high ruff in a rich black and gold dress, holding a staff of office in his right hand, his left hand on his stomach under the George of the Garter hanging from a long chain. Hazel eyes, grey hair under a black hat, light brown beard, florid complexion. Dark grey background. After original in the collection at Berkeley Castle.

The Bone-enamels at Kingston Lacy, copied from paintings in well-known houses, were mostly acquired by William Bankes at auction in 1836, from a set of 85 which had been unsuccessfully offered to the nation for £4000 by the elder Bone. William gave the bulk of them to his brother the Rev Edward Bankes. After William's flight abroad in 1841, Edward returned them to Kingston Lacy.