Peasants before a Fire in an Inn 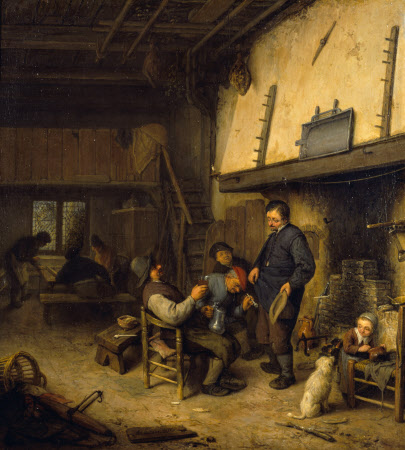 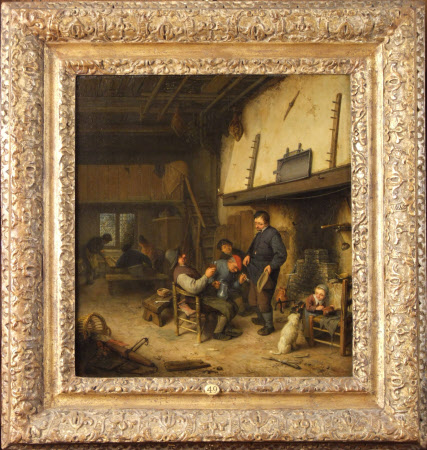 At the heart of this scene of everyday life in a seventeenth-century Dutch tavern lies a wry meditation on human generosity. Standing before the hearth, the man in black looks longingly at the glass of beer being held up before him. To show he has no money purse about his person to buy a drink of his own, he holds out his empty hat and hoists up his jacket. That he is appealing to the charity of the men seated around him is confirmed by the parallel little scene to the right, in which a dog begs for a morsel of food from a child. The rollicking laughter of the men and the child’s smile are carefully rendered. Do these expressions betray cruel delight in the frustrated desires of others, or a good-natured moment before mercy wins out?

Oil painting on panel, Peasants before a Fire in an Inn by Adriaen van Ostade (Haarlem 1610 – Haarlem 1685), signed and dated on plank bottom left of centre: "AV Ostade 1668". The interior of a cottage with three peasants seated round a fire and a fourth standing with his hat in his hand; nearby is a child eating soup from a bowl placed on a chair, with a dog by his side; two peasants in the background in front of a window are playing tric-trac, with a third looking on.

unidentified seal with a bird holding a branch on its beak, (?) windmill, and monogram (?)JMB or JSCB (on reverse)