A Portrait of a Gonfaloniere di Giustizia 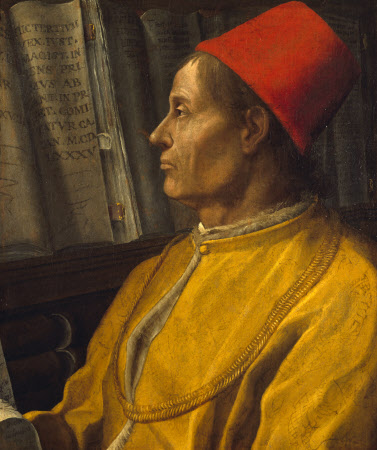 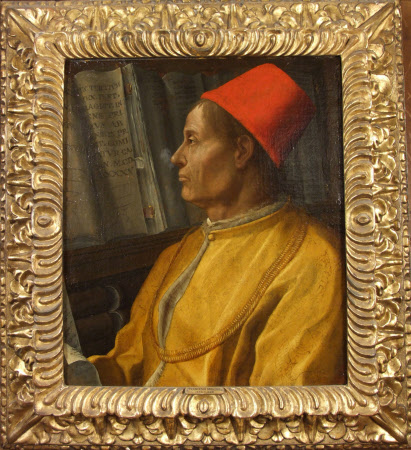 The identity of this sitter is not known although the gold chain about his neck is indicative of high public office. The words on the second line of the inscription on the book are probably an abbreviation of vexillifer justitia, Latin for gonfaloniere di giustizia – a government official charged with enforcing public order in Medieval and Renaissance Italy. The inscription ‘ludovico’ on the letter in his hand has prompted the tentative identification of the sitter as Giasone de Maino (1435-1519), a legal expert and councillor to Ludovico Sforza, Duke of Milan.

Oil painting on canvas, A Portrait of a Gonfaloniere di Giustizia (1435-1519), North Italian School, late fifteenth century. A half-length portrait of a mature man, in his third term of office as High Magistrate in 1485, in profile to the left, in yellow robes with gold chain and red cap, looking at an open book supported on a shelf beside him. Behind him shelves of books. Inscribed, on folio of book: "(ES) ??C TERTIUM/ VEX.IUST./(VD) MAGIST.IN/ ?ENS PRI/ (IR) MUS AB/ANT.IN PR/(XXVI) AET.COMI/TATATUR CAL/ IAN. M. C. D./LXXXV" (letters in brackets appear on first sheet). Below: "pictor/ludovico/(?) 40 rgh/Anno".

Mrs Lucas; with Agnew, from whom acquired by Mrs. Greville in 1935; The bequest of Margaret (Anderson) McEwan, The Hon. Mrs Ronald - later Dame Margaret - Henry Fulke Greville, DBE (1863-1942) from probate records linked with the donation of the property to the National Trust in 1943. This item found on the record for Polesden Lacey pictures, drawings etc., stored in the cellar, page 173.